Gather 'round, kids, 'cuz Uncle CC is going to tell you a story. If you've never seen pure, unadulterated grift in action, well, you're in luck because it's happening right in front of you. I speak, of course, of Rebel News' hilarious promotion of the victimhood and martyrdom of Calgary street preacher and long-time grifter Artur Pawlowski, whose silly antics have graced the streets of Calgary for years. So make yourself comfortable and watch how truly accomplished scam artists ply their trade.

OK, then, what did we learn? First, this is how the hysterical, bloviating gasbags at Der Rebel describe what happened there -- that Pastor Art was "made to kneel in the middle of a busy highway": 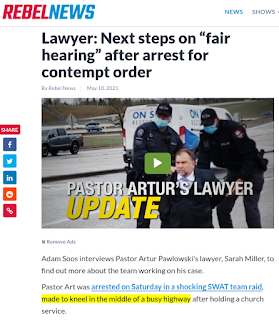 Go back and watch again if you need to, to fully appreciate that every clip of Pastor Art being cuffed begins with him already on his knees, with a six-foot cop on either side of him. Strangely, there is absolutely no video of how he came to be in that position. We are simply expected to believe that the cops dragged him from his Escalade and slammed him to his knees in the middle of a busy highway but ... but ... it is weird that not a second of video footage shows the lead up to that. How ... odd, given that one of my previous commenters claims that it was Pawlowski who voluntarily exited his vehicle, walked to that position and, for the sake of the cameras and carefully-choreographed performance art, dropped to his knees, whereupon the carefully-coached Rebel videographer started rolling.

I've checked other videos and in absolutely none of them is there any video footage showing what happened in the seconds before Pastor Art is already on his knees, which seems awfully suspicious, but don't go anywhere because it just gets better. 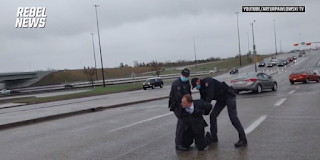 Now, let's take a minute and ask ourselves ... what is wrong with this picture? Why, yes, there's the problem. Even if you grant that the cops involved acted brutally or thuggishly or what have you, it's clear that they're cuffing Pastor Art while standing in an actual highway traffic lane! They're not even in an off-ramp lane, or on the shoulder; no, they're in an actual traffic through lane, which inspires one to ask, what sort of deranged police officer would put himself in that sort of danger? If those officers had, in fact, pulled Pastor Art from his vehicle, it is absolutely inconceivable that they would have marched him out into traffic to affect the arrest. That is simply deranged idiocy, and lends credence to the alternative story that it was Pastor Art who happily marched into traffic and dropped to his knees, all for the sake of the meticulously pre-planned narrative. More on this in a bit, but there's one more point to make.

The final utter fiction from the hacks at Rebel News is that, once cuffed, Pastor Art was dragged bodily to the paddy wagon. Once again, let's go to the video tape, where it becomes absolutely clear that he is not being dragged; rather, it's clear that Pawlowski is (once again, for the sake of his sleazy performance art) simply refusing to walk, so officers have no choice but to carry him: 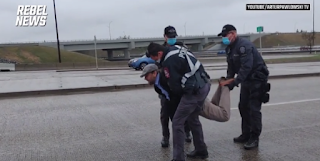 In other words, Pawlowski is clearly choosing to refuse to get to his feet. But there's one more point that's worth making.

Again, since there is no apparent footage of the few seconds before Pastor Art is shown on his knees, can we say for sure what really happened that led to him being on his knees? Not without that footage, of course, but here's the point. It's awfully convenient that Rebel has (to the best of my knowledge) refused to show that part because, if video of cops dragging Pastor Art into the highway and forcing him to his knees actually existed, that would be pure gold. It would be priceless beyond measure and would be the lede on every news show on the planet, so the fact that Rebel is not producing it is massively suspicious, which suggests a very simple way to resolve all this.

It's inconceivable that, in what is so clearly, obviously and hilariously an act of pure choreography and performance art like this, no one has any video leading up to that point. That's just impossible to believe, so the challenge is simple -- let Rebel produce the video. That seems only fair, no?

Time will reveal all truths and motives.......