Oh, dear Lord ... the gullible twatwaffles at Ezra Levant's House of Mouth-Breathing Dumbth just got punk'd in the most hilarious way. To set the stage, I will reproduce the recent contribution of an anonymous tipster, and we'll take it from there (slight editing tossed in at no extra charge):

You missed a SPECTACULAR Rebel-ism yesterday - one of the best/worst yet.

Early in the afternoon, they published an EXCLUSIVE LEAKED MEMO from Suncor, on Suncor letterhead, purporting to be a note informing employees that vaccinations in their unit would henceforth be mandatory, and that employees failing to comply would have their site access revoked.

It was immediately obvious to me that it was fake, for several reasons:

None of that, of course, registered on the Rebel readership, who loyally chimed in with the usual chorus of "fuckin Turdo" and "SunCOMMIES!!" and other in-depth analysis.

I posted the suggestion that this was obviously a fake, made a snarky comment about Rebel editorial standards, and checked the "shares". Over fifty people had already shared the story.

About two hours later I returned to the site. The story had been wiped, and there, for the first time in living memory, was an actual retraction. No explanation, no attribution for the error. Just - "it was wrong, forget about it".

Most interesting to me is the fact that in five years of reading, this is the first actual, bona-fide retraction I've seen - and that's after hundreds of lies and errors in their stories have been patiently flagged for them. What's the difference this time? Oh, right - this time they slandered a OIL company.

So the original story's gone? Well, no. Remember I recently lectured you all on the inestimable value of the Internet Archive's "Wayback Machine?" Well, buckle up, because, first, here's an archived copy of the original idiotic article: 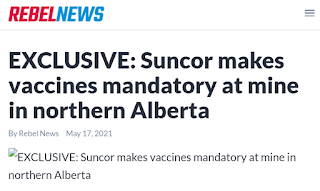 Read the whole thing; it's just precious in its thigh-sucking gullibility. As for the bogus Suncor letter that prompted the previous display of dumbass fucking stupid, well, the Wayback Machine is there for you as well, it's at the end of that archived article if you really want to check it out.

I'd ask just how stupid you have to be to take seriously something so clearly bogus, but I think we already know the answer to that one, don't we? 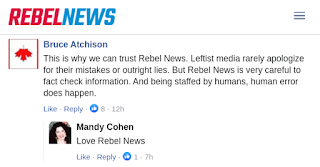 WELL, THIS IS AWKWARD FOR REBEL: GIven the number of times that idiotic story was shared before it was yanked, it is entirely possible that the yammering idiots that take Rebel News seriously are currently shrieking about Suncor and mandatory vaccinations and Charter rights and communism, and if you Google on that combination of phrases, this is what you see at the very first hit: 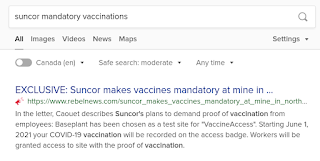 Granted, if you then click on that link, well, there's nothing there:

but if you look closely, you'll notice that (at least in some browsers), you are helpfully directed to (you guessed it) the Wayback Machine, where you can read the archived copy of that article without ever having gone past the retraction.
Yeah, it seems that story is not going away just yet.
Posted by CC at 9:24 AM

If it's not obvious enough, the name is spelled "Mathieu Caouet" in the note, but signed and printed as "Matthew Caouet" at the bottom. How stupid do you have to be to not have noticed that?

Given that the original story was shared by dozens of gullible readers before Suncor yanked his chain and Ezra cringed, one wonders whether they're going to be satisfied with this retraction and non-apology? Will the Rebel still be sending big teams around the world to file non-stories from UN environmental conferences, do you suppose? Or will they finally decide this association is pointless?

Pretty sure this is what people mean by "fake news," right?