Rebel News' Alberta Bureau Chief and in-house troll Sheila Gunn Reid whinges on and on and tediously on while studiously avoiding the point: 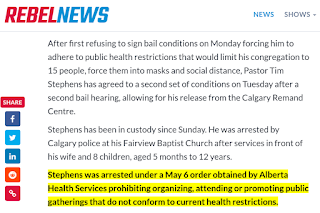 Let me help: "A total asshole of a Christian was arrested for breaking the law."

"Daddy, do we really have to go and watch you get arrested again?"

"Absolutely, sweetie ... the important thing is that you be there and look sad for the journalists. Oh, and this time, could one of you throw yourselves under the tires of a moving police car? Man, that would be must-see TV."

"Dear, I know it sounds extreme, but I was told that it if one of the kids was crushed under the wheels of an RCMP squad car during the arrest, that would totally own the libs."

"Daddy, I don't want to be crushed under a police car."

I do enjoy this little "in front of his wife and children" gloss. Making your kids witness to your humiliation seems perilously close to child abuse. Here's a tip, Rev: if you don't want your kids to see you being arrested:
a) Don't break the law;
b) Don't BRAG about breaking the law;
c) Don't announce that you intend to CONTINUE breaking the law; OR,
d) Leave the kids at home.