... and Rebel News will be there to help them along. 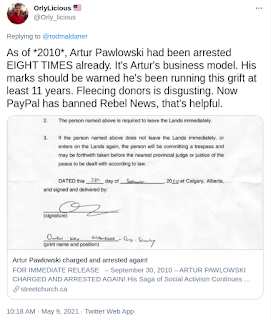 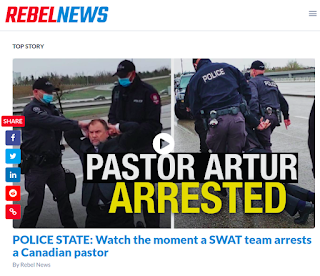 Art's mastery of the art of Media Martyrdom is magnificently illustrated in this performance, ably aided and abetted by the Rebel's excision of his exit from the car and his plonking himself down on the highway, and later by failing to show Art's refusal to stand up, thus forcing the police to drag him. Makes a much more compelling video, don't you think?

The always entertaining "Knowledge Fight" podcast played a few clips of Alex Jones' Infowars interview with Pawlowski on their April 30th episode. The degree of bugfuckery on display was truly amazing. He thought the judge on one of his cases is a relative of Bill Gates (because they share the same last name) and he was happily agreeing with Alex's vaccine = microchip or whatever the fuck conspiracy theories. Bonus points for the not-so-veiled racism and homophobia directed at Calgary mayor Naheed Nenshi.