Just your occasional reminder that GOP bagman and pimp Joel Greenberg just pleaded guilty to statutory rape and sex trafficking and procuring sex partners for "others" (to be named later): 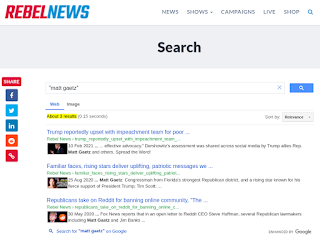 but Justin Trudeau once wore blackface in a high school play:

That's how indescribably shitty Rebel News is as a new outlet. Really, it's that fucking shitty.

In June 2010, Christopher Ingvaldson, who a decade earlier had been a roommate of Justin Trudeau, was arrested and charged with four counts relating to the possession and distribution of child pornography.

A search of Rebel News, brings three related hits on this story, the most interesting being a clip in which apartheid merch salesman asks the PM about a quote from a West Point Grey yearbook in which Trudeau and Ingvaldson (and possibly others) were described as having made someone's "life at WPG more interesting/amusing."

Trudeau's response: "We were teachers."

Contrast this with Phillip Nolan, drummer of the Van Cats, Stephen Harper's vanity band. He was arrested, charged with five counts sexual assault, sexual interference, and sexual exploitation of a minor. It's since become known that the minor was a thirteen-year-old girl.

Up to his arrest, Nolan rehearsed at 24 Sussex Drive and not only performed in the Van Cats at the NAC, but went on tour to Israel, where the performed "Hey Jude" before that great statesman Benjamin Netanyahu.

Such accomplishment! And yet a search of "Phillip Nolan" on the Rebel News site brings not so much as a single hit.