This recent comment from an anonymous opiner is so delightful, it deserves its own marquee:

Art's mastery of the art of Media Martyrdom is magnificently illustrated in this performance, ably aided and abetted by the Rebel's excision of his exit from the car and his plonking himself down on the highway, and later by failing to show Art's refusal to stand up, thus forcing the police to drag him. Makes a much more compelling video, don't you think?

In other words, if one takes seriously Ezra Levant's shrieking, breathless portrayal of Pawlowski's arrest ... 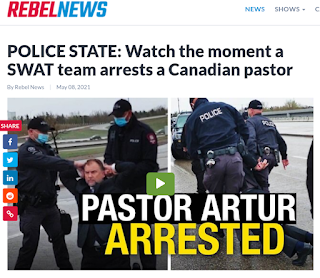 ... according to Ezra, Pawlowski was taken into custody only after a 75-minute high-speed chase through four Alberta municipalities, when he was finally forced off the road after black ops SWAT members rappelling down from Sidewinder missile-equipped Apache attack helicopters laid down spike strips and shot out the tires of his Ford Bronco, wherein Pawlowski was dragged from his burning vehicle, fwown woughwy to the gwound in the middle of high-speed traffic, Tased multiple times, pistol-whipped to within an inch of his life, then forced -- while still on his knees -- to recant his Christian beliefs and swear fealty to Allah while his entire family (including the dog) was executed one at a time Mafia-style in front of him as a lesson to any other devout pastors who might have similar ideas, and finally dragged by his hair off to a SuperMax prison just outside of Red Deer where he was brutally and savagely assaulted by Ryan Reynolds and Hugh Jackman.

The reality, if one accepts the anonymous commenter's description of events, is so much more mundane -- Pawlowski was pulled over, whereupon he voluntarily exited his vehicle and dramatically plunked himself in the middle of the highway, all for the sake of the conveniently present videographers who were there to capture the entire ridiculous performance and carefully edit it later for the benefit of the gullible rubes of "Rebel Nation."

I'm simply reporting what I hear.

Here's the man himself in 2013describing in some detail his early adoption of Dave Menzies style "I Like Annoying Muslims By Taking Their Picture Because I CAN!!", explaining what makes Muslims so nasty, and boasting about his special stature as a Lion of Christ. I guess he's decided life as a COVID martyr is more profitable than Muslim or gay bashing. https://www.streetchurch.ca/journals/muslims-on-the-rise-in-calgary/

An interesting sidebar on all this is the rapidly shifting alliances and party lines among the right wing media. Joe Warmington used to trade on inside scoops from unnamed buddies on the police force, especially when smearing Muslims, immigrants and other malefactors before the evidence was in (e.g., "unnamed sources with the police have refused to rule out terrrorism...", that kind of thing). He's now jumped in to bed with Ezra with the "cops who actually do their job and enforce the law are GESTAPO!!!) How he thinks this is going help his career when the current lunacy subsides is anybody's guess, but I think he'll probably be joining Menzies on the "pull this asshole over over for a deep cavity search if he signals a turn improperly" list.

Has anyone else checked out when Ezra set up the domain for saveartur? April 27, according to whois. This wouldn’t, perhaps, be another Laura Loomer style stunt, would it?