To absolutely no one's surprise, Rebel News' "Chief Reporter", "Alberta Bureau Chief" and trailer park screech harpy currently regretting her recent career choices Sheila Gunn Reid is once again lying blatantly to her collection of intellectually-limited groupies. Let's take it from the top, shall we?

Here's rule number one: Whenever anyone at Rebel News starts yammering on about mask exemptions, they're lying to you. That's a handy axiom that will save you piles of time later. In any event, onward ...

Well, no, turns out that's absolute fucking bullshit as anyone with an Internet connection and a brain cell could have clarified in less time than it takes David "The Menses" Menzies to get arrested. But I grow snarky. Moving on to more lying ...

Well, actually, Sheila, you demented toad, she is, as anyone can see if they took the trouble to consult Teh Google with some combination of "New Brunswick"" and "mask exemption" ... oh, look: 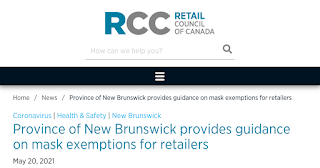 Wow, that looks moderately relevant and seems like the sort of thing I'd want to read if I was curious about, you know, mask exemptions in New Brunswick, ah, there we go: 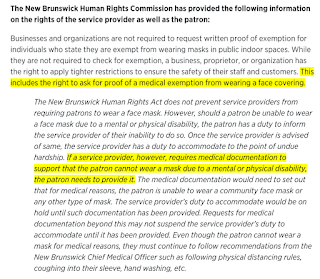 I know ... let's go back and read that part again, slowly and lovingly:

Gosh ... if I was a crack, elite and crack "Chief Reporter":

I'd be pretty goddamned fucking embarrassed at not knowing how to do an online search. But, hey, that's just me, letting my ethics, principles and competence get in the way -- something we can be assured has never stopped Gunn Reid from doing her job. Whatever the fuck her job is.

AFTERSNARK: Bloviating, journalistically-crippled twatwaffle Gunn Reid unintentionally gives away the game with her own idiotic headline to this story:

Note carefully how Gunn Reid -- accidentally, I'm sure -- admits that Kirkland was arrested for "entering store." If Kirkland had been informed that she needed to produce medical documentation for her alleged mask exemption, and she refused, then the service provider was (as we have already demonstrated) within their rights to refuse her admittance, and if Kirkland proceeded to enter the store anyway, then she was trespassing. End of story.

There's more to this obvious grift, but we'll get to that later. You might want to check back.

DOUBLE PLUS SNARK: Just to back up my speculation, note in the above screenshots that, first, Kirkland was refused entry to the store, at which point she apparently decided to enter, anyway. That is the very definition of trespassing. If you don't believe me, well, here you go:

If this is how things went down, then Kirkland does not have a legal leg to stand on.

Even the headline is dishonest. If that woman did not provide any evidence of a medical condition to justify a mask exemption, then the headline should have been worded as, "New Brunswick woman arrested, pinned by cops for entering store while CLAIMING TO BE mask exempt."

It's the same shit from Rebel every time, the headlines are torqued to fit the story.

Coverage: Begin video coverage well into the verbal stage of the confrontation. Edit out as as much "victim" truculence and provocation as possible. While the cops in these stories almost inevitably behave with calm professionalism, select ANY phrase or moment that reflects their growing frustration with the "victim's" bullshit.

Cut frequently back the narrator in studio to keep the indignation pump primed and explain away any apparent misbehaviour by the "victim".

UNDER NO CIRCUMSTANCES SHOW THE MOMENTS LEADING TO THE PHYSICAL CONFRONTATION ITSELF, since this inevitably preceded by the "victim's" refusal to comply with a legitimate policy instruction, resistance, and usually a huge burst of obscenity. Instead, show unverified shots taken later, somewhere else, of the scrape or bruise allegedly sustained.

Always suggest that the victim is going to "sue" or "lay charges". NEVER actually follow up on that, since in most cases the video evidence (which in court, or course, will be unedited) makes a complete mockery of the "victim".