None dare call it "journalism."

At this point, I think we have a pretty good idea why Nazi paraphernalia authority Keean "Tomorrow Belongs To Me" Bexte was given the boot from Rebel News -- he was so clearly attending controversial events, not for the purpose of simply reporting, but for the sake of explicitly stoking confrontation and violence: 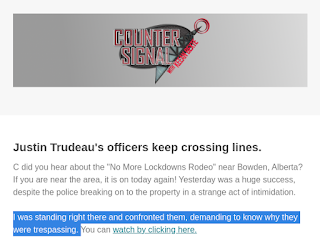 That would be Bexte, actually bragging about how he "confronted" the RCMP, "demanding to know" what they were doing there.

An actual journalist -- you know, someone who understands and practices the craft of journalism -- might want to just, you know, report on the day's events. Not Bexte, who openly announces that his goal nowadays is to goad and harass the authorities into ... well, who knows?

In any event, I think it's safe to say that anyone with the sense God gave a urinal deodorizer disc is going to steer clear of Bexte, knowing the shitstorm that he's eventually going to bring down on anyone in his vicinity.

I'm pretty sure handcuffs and a squad car will be involved.