The Times has such good taste, don't you think? 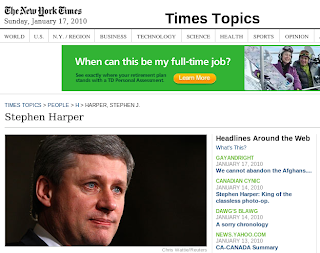 But curiosity compels us to check out Blogging Tory Fred "Gay and Right" Litwin, who seems to be worried about us pulling out prematurely:

Please read [Terry Glavin's] entire post. Now is the time for strong leadership from Canada - that we will stand behind our Afghan comrades, they will not be abandoned, and that we are there to win.

Yes, Fred ... more than anything else, this country needs "strong leadership." Let me know when you run into some.

P.S. And by "we are there to win," Fred means other people prepared to step on IEDs to defend "democracy" in an officially Islamic republic. Fred would normally be all about enlisting, but there's this old high school cheerleading injury, I'm sure you understand.

Glavin and Litwin can explain to the families whose children were handcuffed and executed by the Afghan government's troops all about the bigger picture beyond their own miserable experiences.

Glavin can then jerk himself off to thoughts of his own moral purity.

was it really the Afghan government behind that recent schoolboy executions? Was led to believe that it was ISAF forces that were behind that fiasco?

Hamid Karzai said it was ISAF. Was reported that the forces had descended from helicopters, handcuffed the boys, and led them off where they were later found handcuffed and murdered execution-style. Does the Afghan army even have helicopters?

Well if Karzai were at all reliable, instead of a tinpot "democratic leader" propped up by overwhelming military force from the world's armies (and only Turkey from anywhere in the neighborhood), then I might believe him.

Otherwise, I figure his story's as credible as UFOs. I'll go with the ANA killing them. It's long been known that they're riven with conflicting loyaties, corruption, and tribalism.