I don't just want an Android phone, I want this one: 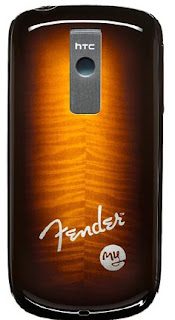 Does that rock or what? (Pun totally intended.)

Cool. About time they recycled those old Strats.

Oh good grief. What next, Gibson tampons... let a vintage Les Paul stem the flow, now in realistic sunburst woodgrain look. I already want to punch people with their devices, don't make it worse. There should be a law that all such mind numbing toys be designed by soviet era Russian designers. Cell phones with big, awkward bakelite dials and grainy cathode ray tubes. I hate to even imagine the dribbling shits that this thing has built in as ring tones. Je suis luddite.

You will be pleased to know that cell phones have reached the limits of electronics and software for radio frequency signal processing. The next generation will include an increase in the use of mechanical components.

Not quite cellphones outfitted steampunk style with brass levers and steel gears, but it's a start.

Yes, zackly like that. Except with sharper corners and less symmetrical.

Personally I think I've finally seen a cell phone I might consider actually carrying, rather than flinging to the floor with excessive force.

Do they have one with a whammy bar? I want the Jimi Hendrix ring tone, and naturally one must play it when the phone rings.