So He Doesn't Always Lie 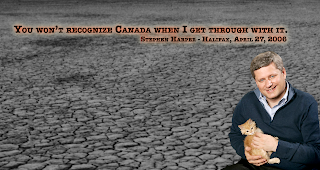 As quoted from a Washington Post article by Halifax Live cheerful ol' Steve, who knew he was also a prophet...

Three ads in particular stand out - Stephen Harper is quoted in the first ad as saying, "America, and particularly your conservative movement, is a light and an inspiration to people in this country and across the world"; from an article in the Washington Post in late 2005, "Canada may elect the most pro-American leader in the western world. Harper is pro-Iraq war, anti-Kyoto and socially conservative. Bush's new best friend is the poster boy for his ideal foreign leader. A Harper victory will put a smile on George W. Bush's face."; and finally this little gem, "Canada is content to become a second-tier socialist country boasting ever more loudly about its economy and social services to mask its second-rate status. You won't recognize Canada when I get through with it".

I really wish we had an alternative to rally behind, a party and a leader that weren't all waffles and potatoes. Well, I suppose we could hold our noses and vote for occasional Canadian and torture apologist/human rights activist Mikey 'the Spud' Ignatieff. Not much of a choice there, I'm afraid.
Posted by Lindsay Stewart at 2:17 PM