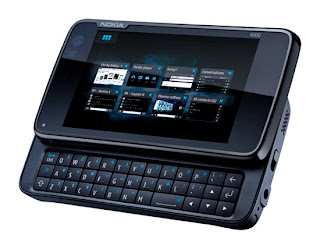 Christmas is less than four months away. I just thought you needed to know that.

What's "superlative" about this gadget? I know I could look it up, but I'm so neo-Luddite...

How are these two facts related, exactly?

It has a slide-out keyboard. I'm suspicious of the concept. I am, of course, in favour of real keyboards rather than the stupid touchscreen keyboards.

But at least it's not Apple. Apple is evil. Eviller than M$. I actually feel less hostile to M$ these days. People have been drinking their milkshake for a little while now.

sorry, CC, but that POS is so lame, you could be conservative. As, obviously, you are not, this post must be a very lame joke. Oh, and contrary to lurking luddite, Námo Mandos, Apple is not evil: highly profitable in a Micro$loth world, yes, but hardly because of that evil. Just smart: build better machines that don't suck and include an OS that actually works, and yeah, EVIL. What nonsense. Yes, you pay for it. What is the issue? Quality always costs.

Apple is evil because it deliberately sabotages open access to its hardware and software, and they take it to a level that Microsoft never even dared. I don't care how easy it is to use---I'm not on board with that level of malice towards the public domain. They take (in the form of BSD) but they don't give back. Watch whom you're calling a Luddite here, mister.

For example, RIM is not really on the openness wagon. I mean, they have a Windoze-only client for the desktop, and they don't publish their source code, but they don't actually hate their users and want to keep them in jail.

And I never really found that Apple works that well. In the pre-OSX days, it crashed on a regular basis, leaving me wondering why exactly did Apple users set themselves on a pedestal. In the post-OSX days, I find it no easier to use than Windows or Linux. It is pretty, though.

If computing to you is a fashion accessory, enjoy your iPhone and all its vain gimmickry.

In the words of my Irish granny ... "The only difference between men and boys is the price of their toys."

Quality always costs.
Actually, no.
If you look at Apple desktops the components, for the most part, are just inferior PC stock parts that Apple charges a insane premium for....

Námo Mandos has it pegged....