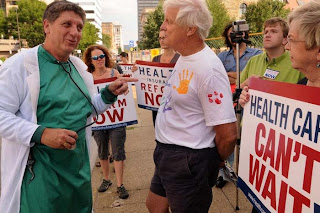 Ambulatory excrement, Randall Terry celebrates Dress Like Your Victim Day and attempts to inflict his vulgar form of christian shari'ah on the populace. The good folks of Charlestown, W. Va will need to scrub the steps of the federal courthouse after the little visit by Operation Ratspew. In a vulgar little bit of street theatre, Terry and his mentally disadvantaged cohorts tried to sway rational people that supporting a health care bill was equal to killing babies and old folk, just like we do up here in Canada.

Terry is taking his little song and dance act on the road with the intention of disrupting civil discourse among his betters. The Charlestown Gazette notes that Terry's visit drew all of the support it deserved. None.
Posted by Lindsay Stewart at 11:34 AM

Ambulatory excrement ... yes, that is one of many ways to describe Randall Terry.

Loathsome verbal propagandist would be another.

The linked article mentioned that Terry intended to "disrupt" a townhall meeting scheduled for yesterday evening. According to this by Jane Hamsher, he got himself thrown out. Apparently there's video.

That's the fetus fetushists for ya. They want to be sure every zygote gets to be a fully formed person, but then they don't care to ensure that that person grows up with proper health care.

When it comes to abortion, the crazy just never ends.

I'm sure all of this is posturing to hide some very fundamental and disturbing moral issues. With all of them...Randall Terry, SUZANNE, the Catholic clergy (obviously).

The only people I know who are anti-abortion personally are all pro-choice, so I really just don't get it. They must have all feasted on roasted babies at some point in their life and are now racked with guilt.

Yeah - other people's roasted babies. Gawd. Forget the counter pro-choice campaign - we need a MIND YOUR OWN BUSINESS campaign.

“Gawd. Forget the counter pro-choice campaign - we need a MIND YOUR OWN BUSINESS campaign.”

Sigh, Oh Sooey, it would be so nice. The only way to get their attention requires a blunt instrument.
Sadly, I fall into the the blunt instrument category. Fortunately, I am also a Tom Robbins fan.

Here's video of Terry getting booted out of a town hall meeting in Reston, Virginia on Tuesday night: http://www.huffingtonpost.com/2009/08/26/randall-terry-thrown-out_n_269974.html
He fallaciously insists that the healthcare bill will fund abortions (I wish it did, but it doesn't) with the slogan "We won't pay for murder." Terry, of course, seems to have no problem with the murder of doctors who perform abortions.