Oh, God, Denyse, but you are a retard.


Lord, but Denyse and her creationist fuckwit colleagues are just burying themselves in a mountain of stupid. Recall from an earlier post Denyse's latest brain-dead excuse:

12:52 pm: At Uncommon Descent, Dave Springer argues that the explanation for the discrepancy between the Expelled producers' account and Dawkins's and Myers's account about whether Myers received an invite to the Expelled screening is that Myers was gaming the system by responding to an invitation he had not actually received.

He fooled the host by gaming the invitation/response system employed. The host wasn’t checking RSVPs against a list of invitations sent out but rather just assumed that any RSVP received was in response to an invitation sent out.

That's right -- Denyse is using as corroboration for her latest pathetic excuse ... an article from one of her own web sites. How self-referential can you get? But it gets better, when you notice the following gem in the comments section: 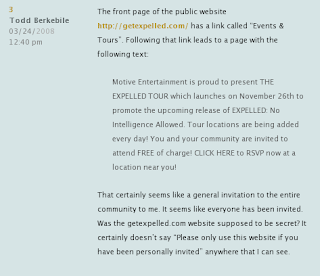 And there you have it -- game, set, match. Thanks for playing, Denyse. There's the door, and take your lying hack colleagues with you when you go.

I seriously cannot keep track of this...is Denyse simply paranoid, or is she really just a bold-faced liar?

Lying for Jesus!!! It's a rightwing Christian thing

Lizards, I tell you. Twelve-foot lizards. Remember you saw it here first.

Yikes! I’ve never actually waded into the comments over there before. What a bunch of maroons. One of them quotes from an “eyewitness” whose account is happily being promoted on the film’s website.

I just happened to be standing directly in line behind Dawkins’ academic colleague. Management of the movie theatre saw a man apparently hustling and bothering several invited attendees, apparently trying to disrupt the viewing or sneak in. Management then approached the man, asked him if he had a ticket, and when he confirmed that he didn’t, they then escorted him off the premises. Nowhere was one of the film’s producers to be found, and the man certainly didn’t identify himself. If a producer had been nearby, it’s possible that he would have been admitted, but the theatre’s management didn’t want to take any chances.

The “witness” is a student at the UofM and part of an “outreach Ministry” whatever the heck that is.

Others speculated that Myers is an immoral person who would resort to all sorts of nefarious tactics because he’s an atheist. Oh, and has a “potty mouth”.

Ugh, I could feel my IQ dropping as I scrolled through more…

Having met PZ, I have to say "hustling" doesn't come to mind when I think about him. My new-age-leaning girlfriend (who asked his and his wife's birthdates of course to get their signs) described him as "mild".

As we've already established, since PZ registered for the screening online, he had a ticket.

Off topic, but I see good old John Cole at Balloon Juice was man enough today to post his "Iraq Retrospective":

I mean, I could go down the list and continue on, but you get the point. I was wrong about EVERY. GOD. DAMNED. THING. It is amazing I could tie my shoes in 2001-2004. If you took all the wrongness I generated, put it together and compacted it and processed it, there would be enough concentrated stupid to fuel three hundred years of Weekly Standard journals.

How many Blogging Turds would have the guts to admit as much? (Rhetorical question, no need to answer.)