Submitted for your ... edification? 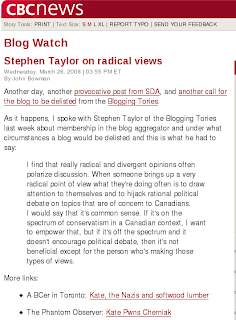 Thanks for clearing that up, Stephen. I appreciate it.

DELICATELY-WORDED FOLLOWUP: I left a comment on that post by Bowman, and asked him quite directly what information he took away from Taylor's prose, and how he thinks Taylor answered his question. That was at least an hour ago and, not surprisingly, Bowman is being annoyingly slow at dealing with incoming comments.

I'm glad to see Stephen Taylor was able to find that passage in his well-structured, properly-indexed database of stock responses to negative commentary with regard to his new media project. I expect nothing more from him.

Well golly gee. I do declare.....That paragraph makes as much sense as stereo instructions in Japanese.

So basically, a BT can say or do anything they want, and Taylor is A-Ok with it. Maybe.

Where is my advil? And the scotch?

By the way, I a left comment over there (which I've rarely done at establishment media sites with the exception of Antonia Zerbisias's blog)...I hope it will appear within the next four days.

So basically, a BT can say or do anything they want, and Taylor is A-Ok with it. Maybe.

Well, as you'll note, he refers to a "a spectrum of Conservatism." I dispute, categorically, that any such spectrum exists. I imagine, though, that Stephen Taylor would not agree on what is commonly understood by the term "spectrum."

Sorry, can I get a translation of that into English?

Sorry, can I get a translation of that into English?

Shorter Stephen Taylor: Unless they sacrifice newborns live on their blogs via web cam, I'm totally okay with it.

Am I the only one who understands Eastern Canadian Conservatives?

It's spin, pure and simple. If he didn't write that himself, he probably got Tasha "Harridan" Kherridin to write it or asked Daffy Dumbdaifallah to ask Hugh Segal for some advice. I'm pretty sure Sandra Buckler is a little skittish about her communication trail, these days, so I doubt she was involved this time.

...a flurry of emails figured somewhere at some point, at the very least.

When I was at the U of Waterloo, there was a professor, whose name sadly has evaporated from my mind with all the undergrad beer fumes, that was an expert on semantics and specialized in jargon and the deciphering thereof. He used to go on radio and give examples of how politicians could speak for ten minutes without actually saying anything at all and sound intelligent and even eloquent doing so if you weren't paying strict attention. I think he wrote that thing for Stephen Taylor.

When I was younger, our media used to do that work (challenging hype and spin), but that either just doesn't happen enough these days, or the media is too fractured for anyone to get a common understanding of how much of a problem spin and hype are in the process of becoming informed.

I find that the CBC has been particularly derelict in this respect.