CTV is covering a new poll that looks very bad for the Liberals.

A new poll paints a devastating picture of a Liberal party completely reduced to a rump in Quebec if an election were held today.

"For the Liberals, they are in a worse position than they were in the middle of the sponsorship scandal," political commentator Jean Lapierre told CTV's Question Period on Sunday.

I certainly hope that nobody within the party is surprised. Although having heard the commentary of such punditorial wizards as Monsieur Cherniak, one can't help but imagine that they will be wide eyed with shock. As a party they have abandoned their role as opposition to the government. They have rolled over and exposed their bellies so often that their dismal performance has driven away any support they might have had. Stephane Dion has failed to provide leadership, he has failed to stem the tide of the weak minority re-shaping the nation to suit it's own agenda.

On a personal note, over the last year or two I have written a number of letters to Members of Parliament, Ministers and Senators. I have received detailed responses from Mr. Layton and the NDP, I have received the brush off and lies from Mr. Prentice and the PMO, I have received no responses whatsoever from my MP (to whom I have written more often than anyone). In fact, the only Liberal Party response to come in so far, is from a Senator. Senator Hervieux-Payette took the time to respond in detail to issues I raised concerning Bill C-10, no such response was forthcoming from the appropriate critics taking up space in the Opposition benches in the House of Commoms. This is not an issue of preception, it is an issue of performance. The Liberal Party has not shown an interest in doing the job of Opoposition, why on Earth would we entrust the greater responsibility of governing to them?

We've all seen the dismal display of the voting records and attendance of the Liberals in their supposed role as Her Majesty's Official Opposition. 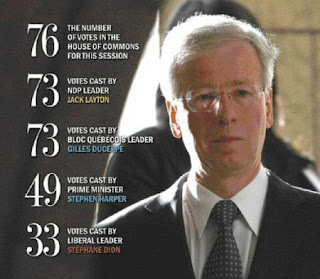 Many of us are unlikely to forget Monsieur Dion and the Liberal's response (or lack thereof) to Bill C-484.

At this juncture, the country is best left as it is. The Conservative Party of Canada is in a de facto majority position, as they are operating unopposed. The Liberals are adrift, utterly ineffectual and there are no viable alternatives. Yet whilst the Liberals snipe at one another and there is a sense that the party ranks are jockeying for position, Dion continues to threaten that he might bring down Harper's government. Much as I would love to see the Conservatives faulter, fail and fall out of office, that will not happen. Any election in the near future will return a Conservative majority. If Dion and the Liberals think otherwise, they are simpletons and fools.

The Harper forces would love nothing more than an election. They are doing everything in their power to prompt a return to the polls. They would make the choice of potatoes on the Parliamentary cafeteria menu a confidence issue of they could.

Leadership is not the sole issue facing the Grits. There is a systemic reek of arrogance within the party that is made all the worse by their failure to do their jobs. Among the leaders in waiting, there is no-one that Canadians will rally behind. Ignatieff is neither liked nor trusted, Bob Rae will forever be tainted as the NDP premier who floundered and sank out of sight in Ontario, the man who generated the backlash that brought the much reviled Mike Harris to power. Failing the emergence of Justin Trudeau or a similar new face with sufficient charisma and strength to wash out the old, dirty players, there appears to be little more to hope for than a continued minority.

At this point the Liberals need to purge their ranks. The Conservatives were very, very successful in hanging the stink of Adscam and the sponsorship scandal around the neck of the Liberals. To date, that stink of corruption and entitlement has not been washed away. An imminent return to the polls would perform that purge in a most unpleasant manner. Stephane Dion, should he decide to bring down the Harper government, will go down in history as the man who presided over the decimation of the Liberal Party of Canada.

My solution to the Liberal malaise... have Dion step aside and draft Joe Clark as leader. Failing that or something equally audacious, we're doomed to their fumble fingered parody of the night of long knives. All of their protestations aside, the Liberals are in disarray. They need to clean out their ranks, pull up their socks and provide at least a semblance of vision and leadership.
Posted by Lindsay Stewart at 12:08 PM

It's easy to point at the voting records and screech that Liberal party isn't providing opposition, but you're ignoring the fact that they're trying to find the key to turn things around before that next election.

If they'd have brought down this government and caused an election that heralded a CPC majority, then you'd be screeching it's their fault.

The bloc and the NDP are in the sweet spot, where they can vote however they like, and not be blamed for the disaster that follows.

It looks like the progressive portion of the Canadian political spectrum is going to be on the outside looking in for quite a while.

You'll be doing a lot more snarking for the next decade or so; go ahead, you might as well blame the Liberals for that too.

Why is there this perception that an election will bring a Harper majority?

It only exists because the Liberals don't have many substantive differences with the CONS.

They're two peas in a pod on Afghanistan. They're united on the SPP. They're united on missile defence. Dion dithered on Kyoto, while Harper is bought, paid-for, and deluded on it. The end results for the eco-system are the same.

The Liberal Party, of all parties, ought not to be terrified of the electorate. The Canadian people don't like the Harper agenda and it would be easy to demolish them but for the sad fact that the Liberals HAVE THE SAME AGENDA.

robert, i have the sad feeling that the only thing that will unseat the conservatives at this point will be their own actions. it will take a policy disaster or a scandal of sufficient scale to truly bring them down. the liberals as currently configured will not do it. they cannot win an election now and they won't be finding any magical keys any time soon. the failure to oppose the government on numerous issues has served to anger and alienate their traditional base. that includes voting on a great many issues that are not confidence motions.

their voting and attendance has been dismal. period. there is no key to the voter's confidence in a lackadaisical performance. there is no perceivable sense of leadership from the liberals or from monsieur dion.

Well said. The LPC is in a truly sad state of affairs these days and no amount of pretense or hopeful apologetics can disguise their incompetence and lack of vision.

I want to believe that the Dion Liberals are doing what CC did with Patsy Ross - giving them enough rope. A campaign now is going to involve questions about not only Afghanistan and Kyoto, but also Atomic Energy Canada, the Wheat Board, Cadmanscam, etc etc etc.

Please Mr. Dion, get your ducks in a row and pull the gosh diddly-danged trigger already

PSA, I don't entirely disagree; but I don't think anyone appreciates the difficult position they're in.

Lack of vision? Ok RT, maybe we should try drafting you for our leader.

I'm with the Rev on this one.

...at least the first part.

Robert — I understand the position the Libs are in and sympathize with it, but even though I don’t expect an election until next autumn, my patience wears thin…

As for the lack of “vision” that wasn’t just blowing smoke. The LPC refuses to release its policy platform until such time as an election is called, so in fact, there is, as I asserted, a notable lack of vision at the moment.

as I asserted, a notable lack of vision at the moment.

I can just imagine what the Conservatives would do if the Liberals released a platform now. God, the press conference alone would yield images, the subsequent photo-shopping of which would border on the pornographic.

All right...if one were to grant that you are correct in ALL your descriptions of the Liberal party...all the woes, past and present...all the misdeeds, from adscam to the stuff we still have not found out about (but that is there to be found)....all the arrogance you ascribe to the party itself...

WHY SHOULD THE LIBERALS NOT COMMAND A MOJORITY???

After all, these are just trifling little matters that could not ever (or, at least, for long) slow down the righteous (and public-cash-spending) LIBERALS!!!

They control the civil service! (actually, this is uncomfortably true...) They still have the CHRC's working to hunt down anyone not 'liberal' enough! And, to an unfortunate degree, they control much of the MSM (without the reporters or editors themselves catching on)!

Not even a pipsqueak like Dion could possibly slow down 'the machine'!

On any other day than today, you would receive numerous comments on your question about a "mojority".

i was going to comment on the 'mojority' but unfortunately i neglected to get a screen shot.

Xanthippa... a monastic woman with a MOJORITY on the mind.