Victory is mine! The mind-numbing assholitude of Kate McMillan.


First, let's check in on the non-retarded, to fully understand what happened in Toronto during Earth Hour:

As city powered down for Earth Hour, electricity demand shrinks about 8.7 per cent compared to a typical late March Saturday night

Now, go back and read, slooooowly, the most important part of the above (important bit emphasized for the hard of thinking):

Quite right -- the only way to judge whether Earth Hour had any effect is to compare the electricity consumption during that hour to what it would normally be. It doesn't matter if power consumption actually increased for that hour -- what matters is whether or not it increased as much as it normally would. Are you with me so far? Really, make sure you understand that point, so that we can genuinely appreciate the assholitude that is Kate McMillan: 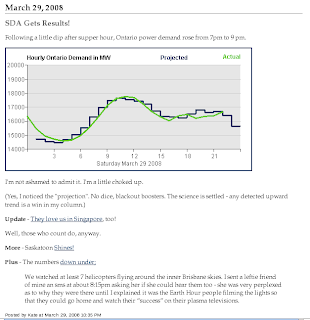 And what do the non-stunned among you see in the data above? Why, yes ... the actual power consumption is noticeably lower than the projected (or normal) power consumption right around Earth Hour. A victory for folks who give a shit about the environment? Not so fast -- dumbfuck Kate is having none of that (emphasis added):

(Yes, I noticed the "projection". No dice, blackout boosters. The science is settled - any detected upward trend is a win in my column.)

And on that astonishingly misrepresentative basis, Kate declares "SDA Gets Results!".

P.S. Yo, Catprint! How are things on your planet these days? Just curious.

AFTERSNARK: There's something seriously disturbing about this statement from "The Holocaust is a Hoot" Kate:

The science is settled - any detected upward trend is a win in my column.

Ignoring the fact that Kate is entirely out to lunch on the end result, what does it mean to say that "The science is settled?" What "science?" There was no scientific principle at stake here -- simply a bunch of folks who figured to turn off a bunch of lights and save some power. And regardless of whether or not it made a difference, nothing about "science" was ever at risk.

So it's not as if Kate is wrong with that statement, so much as she's simply spouting meaningless gibberish. No matter how Earth Hour turned out, science was never in any danger one way or the other. And it's that statement from Kate that makes me think she's lost it mentally, and has finally been reduced to writing illogical nonsense that has no semantic value whatever.

I mean, stupid and dishonest is one thing, but there really is a level below that that's even more frightening, and it looks like Kate's finally arrived. And, from here on out, I'm guessing this is not going to be pretty.

GOD ALMIGHTY, WHAT A FUCKING RETARD. Even when some of Kate's commenters try to explain the significance of "projected" vs "actual" power consumption, this is the breathtaking stupidity you get:

Let's step back for a second, who do these shit stains think they are competing with?

Further what "team" do these fucking mouth breathing examples of wasted DNA think they are on?

What prize do they expect?

I really don't get it.

Let's assume for one second that the science is in fact settled, what could be the possible down side of cutting emissions and energy usage?

From a free market point of view, it's cheaper for energy companies to get us to use less energy than building new generator equipment. From a health point of view clean air is good for everyone (unless the new theory is that only lefties have problems with their lungs..).

I just don't get it.

Oh, hey, it's still Sunday when I posted by the way..

Kate's use of graphs and charts is more indexical than symbolic (I think I'm finally getting a glimmer of understanding of Piercian semiotics, thanks to her). She can't read or understand them, so she merely uses them as pointers. And this is exposed for all to see when she actually tries to interpret them. I wonder if she knows how silly she looks when she tries to do science?

wrt "the science is settled," I think the phrase you're looking for is not even wrong.

The whole "charts I barely understand prove some point I project onto them" thing is funny to watch.

Been there, done that. One of my favourite expressions.

Well, that and "unspeakable dumbfuck."

oh the irony of SDA pointing to graphs and model projections to prove a point....and claiming their right regardless of what others think!

Every one of KKKate's tragedies should be used to embarrass her MP, Carol Skelton, who was last seen proudly planting a campaingn sign on KKKate's property. Whether Skelton or KKKate cares, hanging the stink of corrupt liars on their more public associates is a time-honoured tradition...of the Right, in any case.

...Ewps. Too late. Carol Skelton to not seek re-election. I guess the next in line would be Monte Solberg, who gushed about her blog at one point.

If this is the chart she's using:

I don't think she's really make her point if she's trying to argue that energy use increased during Earth Hour.

The points are for the average energy use in an hour, so the rise between 7pm to 8pm doesn't necessarily show energy use rising between 7pm and 7:59pm, but that compared to 7pm to 7:59pm, there was more energy use during 8pm to 8:59pm. They're just using lines to join up the different points on the graph. This explains the dip after 18hr (6pm) to 19hr (7pm). I doubt that there was a gradual slow down in energy use between 6pm to 6:59pm, the hour leading up to Earth Hour. it does make sense if it really shows that compared to 6:00pm-6:59pm there was less energy used for the period betwen 7:00pm-7:59pm.

Anyone else think the woman is a professional provocateur? I suspect she knows it. Don't take her or her echo chamber seriously.

Let's get off the SDA hamster ball, eh? Lets!

Even when some of Kate's commenters try to explain...

Who tried to explain anything? All I saw over there were a bunch of monkeys throwing their feces around.

Anyway, no more of this for today. If I want to be civil, I'm going to have take a break from paying attention to fucking lying CUNTS like Kate McMillan for the remainder of the day.

Anyone else think the woman is a professional provocateur? I suspect she knows it.

I tried to believe that before, but she really is a nasty piece of work as many have found out. Provocateur is a socially-useful roll to play...that *thing* is something else altogether.