The current shrieking from the grift-o-sphere is that the Canadian government (more specifically, Justin Trudeau, who appears to be more powerful than Thanos) "ordered" GoFundMe to shut down the $10M trucker grift. No, this is not what happened, as the courageous few on social media are trying to explain: 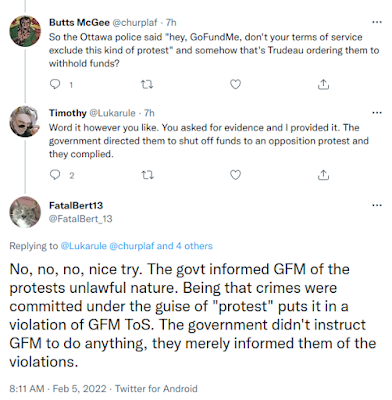 In short, many, many, many, many people reported the criminal nature of the truckers' siege and occupation of the city (with unimpeachable video evidence) at which point I would think GoFundMe had absolutely no choice but to find the fundraiser in violation of its Terms of Service and shut it down.

No one "ordered" anything. What part of that do some of you find so difficult to understand?

The "sanctity of the contract" libertarians are always shocked and outraged when a company applies the contract terms to them.

People who believe that the PM can pick up the phone and change the price of gas will believe anything. For example, Candice Bergen...