OMFG ... this manipulative bullshit has Ezra Levant written all over it: 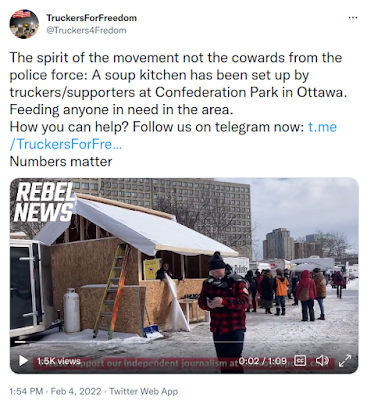 Here, let me tell you how this is going to play out. Truckers will, of course, gush over how altruistic they are with this, and how they're trying to give back to the community and so on.

The city (quite properly) will move in and dismantle it because, regardless of its altruism, it is an illegal structure that was erected without any approval on public property.

The truckers (and particularly Ezra and Rebel News) will freak out and publish:

"The City of Ottawa claims that it cares about the hungry and homeless, but they just moved in and, in an appalling demonstration of liberal brutality and thuggishness, demolished a soup kitchen that the truckers' convoy had built at their own expense to give free meals to the area's hungry and homeless!"

That's how it's going to go, because this sort of sleazy propaganda is pretty much Ezra's M.O. Let's watch.

BY THE WAY, the Ottawa cops have already irredeemably fucked up their response to this. The correct time to have dealt with that illegal structure was the instant the cops became aware of it. But, no, being the dumbfucks they are, they allowed it be completed, and now it's going to be that much more difficult to dismantle it in the glare of all the publicity.

How did someone as motherfucking stupid as Peter Sloly even graduate the Academy, much less become a chief?

The Telegram group for truckers is an amusing one if you like conspiracy theories about "false flags" and the like.

And once again, the Conservative party of Canada supports this trucker tantrum...

The "Freedom Convoy" is just right-wing extremists.
There needs to be zero tolerance for them.


As for Stoly, I'm guessing lots of lube.

As for what the protest is about, the "truckers" are asking for an end to all covid mandates. Everything.

The convoy organisers are completely ignorant of what is and is not in Trudeau's power.

Candice Bergen, being elected at the Federal level, is aware of the powers that Trudeau has at his disposal and what he can do.

Her there are “good people on both sides,” is completely farcical.
Why is the Canadian Press pushing her views without informing that the organisers are white nationalist, blatantly fascist morons.

"Good people on good sides", lol! How Trumpian of Bergen. Good to confirm her head is as empty as the camouflage MAGA hat she put on said dome.

As for that shack those morons built, I thought people were joking about that, but nope...it was built, and somehow a bunch of propane tanks found their way into that area as well. Great job there, Ottawa "police". Might as well have the quotations around police, because I'm not sure what they are at the moment. Supervisors? Cheerleaders? Ass-scratching enthusiasts?

Maybe someone should inform those "police" that the "protestors" see them as the cowards they are, if the tweet above is any indication. Perhaps they'll muster enough feelings to act offended about that...or more likely not.

...and now, if this Twitter post is accurate, apparently saunas are on their way to Ottawa for these chucklefucks:

And here I was, in a previous post, joking about the Ottawa "police" being this close to giving hot oil massages to their new best friends. Looks like we're not that far off. *Rolls eyes*

Seriously, it's hard to be humourous these days, not because of political correctness, but because real life keeps throwing such bizarre curveballs. How things like The Onion have stayed in business the past few years is beyond me. I don't envy their writers for having to come up with materials that's somehow wackier than real life.