The CPoC and NASCAR: A match made at MAACO.


All right, enough with the Conservative Party/NASCAR jokes. I, for one, think it's a great idea, and I just can't wait for the first visual of something like this with the big "C" splashed all over it limping into the pits: 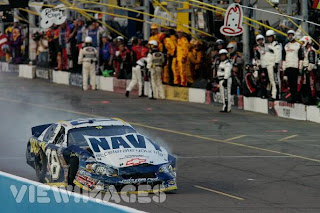 At that point, I'm pretty sure the jokes will write themselves.

Will they be putting their logo next to the Viagra logo? As you say, this stuff writes itself.

You couldn't have picked the ARMY car for a graphic?

Although... it does look like something I drove once.

The best punch line may be here
http://runesmith.blogspot.com/2007/06/but-wait-theres-more.html

More about the driver of said con-mobile.

I agree, I'm waiting for the first time the car slams into the wall after failing to make a left turn..... there will be posts, I can assure you :-)

stageleft said: "I'm waiting for the first time the car slams into the wall..." I'm just waiting for a wheel to come loose and fall off... instant visual metaphor!

Advertising through NASCAR is a move that leaves liberals and socialists in absolute hysterics.

Right up until the election, that is. Then they wonder why they didn't get the support of the "common man".

My first thought, upon hearing of this ludicrous idea (well, after laughing at the idea that our national Cons must think that since that crowd voted for Bush in the U.S. they'll be slavering to fall all over themselves to vote for the Cons), was, "Hasn't anyone told these people that 'sponsorship' brings down governments in this country??"