Once again, I called it.

Recently, I explained the fundamental screw-up on the part of Ottawa Police Services and their response to the occupation and siege of the city by Nazi truckers; particularly, the convoy's construction of an illegal "soup kitchen" in Confederation Park:

Apparently, I am not the only one who understands the necessity for dealing with shit like this the instant it walks in the door: 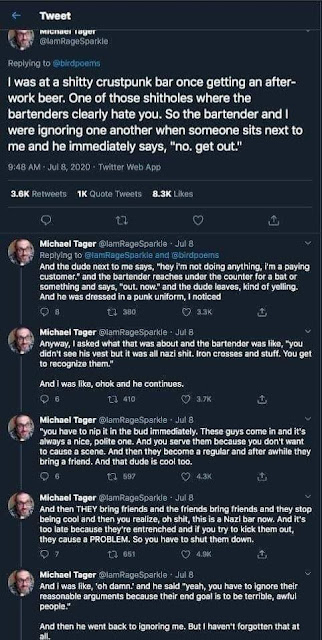 So the truckers build a soup kitchen in Confederation Park, and it doesn't seem like that big a deal so you let it go. Then they build another one a little down the road, but because you tolerated the first one, it would be difficult to justify objecting to this one. So it stays up.
And then there's a third one, and a fourth one and, before you know it, Nazi truckers are putting up illegal structures wherever the fuck they want, and you've lost any moral ground to complain about it anymore.
And I was right. Again.
Posted by CC at 9:32 AM

Yup, see also RCGT Park. Had to look that one up, it's been a while. From a CTV reporter:

It's not a "soup kitchen." It's a food distribution hut for protesters. Apparently, they will share if anyone else asks. It's primary purpose is not charity. The police just need to ask them to take it down. If they don't comply, it will be a protesters' problem. More tickets, at minimum. They don't seem too interested in backing the blue. And the fire department might want to deal with the propane and fuel cannisters.

This protest is not a hippie encampment, to which supporters like to draw parallels, justifying their 'right to peaceful protest.' A big rig is $100K, not a tent. The semi in Quebec City right now helping fuck up Carnival (the one with the obscene Fuck Trudeau/Legault signage) is $200K+. Signage like that is ~$500. There is a lot of equipment present in Ottawa. Apart from the tractors, there are tractor trailers. Who knows what's in them. As for the other vehicles, call them support.

If you looked at this through a militaristic lens, it's a formidable presence. They know it. Honking is unsettling civilians, like a torture technique. It wears people down. No permit. There are bylaws about idling vehicles, which are ignored. The 'soup kitchen' is Class I-IV field logistical support. Make of it what you will.

nothing here a little gasoline and some matches wouldn't fix