If you were so fucking stupid as to hand over cash to Ezra Levant or his alter-ego The Democracy Fund to pay lawyers to defend the Ambassador Bridge blockade, well, I have bad news: 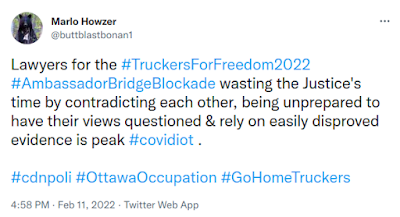 AFTERSNARK: This is the utter twonk that TDF handed over big bucks to, just so he could embarrass himself in open court; unsurprisingly, he is associated with the execrable Justice Centre for Constitutional Freedoms.

IT JUST GETS BETTER: Again, this is the incompetent colostomy bag sent into legal battle by Ezra Levant and The Democracy Fund: 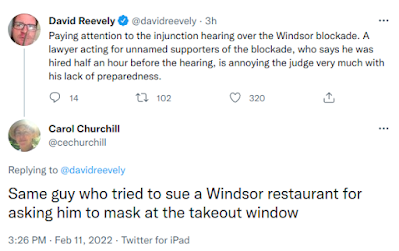 Wait, hang on . . . so he helped a family kidnap (and try to reprogram) their adult daughter because, it said, the family thought she had come under the influence of a cult. That suggests she hadn't actually. Makes me wonder what was really going on . . . since he's a right wing wingnut and plausibly was helping a group of same, maybe the problem was actually that the daughter had joined the real world?


They actually did sent their best and brightest. It's just not that high of a bar.


Purple, speculating here, but she had probably left the family's Pentecostal church to join some radical sect, like the Episcopalians.