Chronicles of Twatrick: Much ado about SFA.

Nothing new to report, but I thought I'd share bits of a spectacularly idiotic missive that undischarged bankrupt Patrick Ross wrote to my SK lawyer back on December 10, 2021, and you'll see shortly why it has such entertainment value.
After going on and on and whingingly, tediously on about how maliciously defamatory I was with my defaming malicious defamation, Patrick laid down his terms: 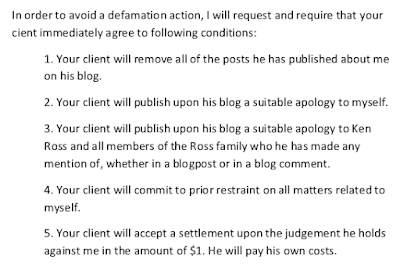 And a pony. He asked for a pony, too, but that is neither here nor there. Long story short, I made it clear that Patrick could go pound sand, but here's why this is so amusing, as Patrick followed up the above asinine settlement demand with:

"The alternative is that I will immediately [emphasis added] commence an action for defamation, harassment, and the deliberate infliction of emotional suffering ... blah blah blah ..."

The amusement is that this letter was sent two months ago and, after being told to pound sand, Patrick did what Patrick always does after promising to do something "immediately" ... he folded like a cheap card table. There was no action; rather, as I have heard, Patrick's life is such that he is now living out of his car and hunting his own meals while I empty his bank account on a regular basis.
That's all. You can go back to work now.
BONUS TRACK: Patrick is truly caught between the proverbial rock and hard place. He would desperately love to file more utterly meritless actions against various people, simply to waste their time and money. However, to do so as a self-represented litigant, he must provide a legitimate and accurate address for legal service, and the instant he does that, the Office of the Superintendent of Bankruptcy is going to have a very unpleasant chat with him. This is why Patrick has gone to ground lately -- he is well aware of how many people are looking for him and he's trying to lay low, but that is going to work for only so long.
On top of that, if he's surviving off of his credit union account, well, every time he tries to make a withdrawal or a payment with that account, he needs to worry if there's anything still there, or if the sheriffs have once again emptied it out from under him. In any event, I am still looking for any further information as to where Patrick is living and/or working, as I can use that to extract even more from him.
Keep those cards and letters coming in.
Posted by CC at 2:46 PM

And they say there is no good news anymore!

Patrick hunting for his own meals? Chasing the Hamburgler for Big Macs at the Clairmont, AB McDonald's doesn't count as "hunting."

So ... in short, he remains both a blowhard and a legal ignoramus.

... and he thinks you're going take a settlement of $1? Ahahahaha.

He's a regular genius, isn't he?

Also, why did Twatrick write "upon his blog", instead of "on his blog"?

These are the types of things stupid people write when they're trying to look smart.

Did he pay the extra to the lawbot for "govern yourself accordingly"? What about the cadillac package that will have a "preserve all records you scum ^h^h^h^h^h^h^h^h^h ?

Has your lawyer stopped laughing yet? This is the stuff of law school show and tell for generations.