A question about the Ambassador Bridge, if I may. 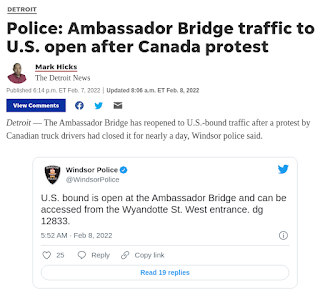 ... but notice that it is just U.S.-bound traffic underway again, which raises the question:
At what point would the (U.S.-bound) dumbfuck truckers' convoy blocking that bridge fall under U.S. jurisdiction (which is, I assume, why this was cleared so quickly)? At any international crossing, there is typically a precise point where you are passing out of one country and are now in the next. Also, there would be a point (not necessarily the same one) where you are now irrevocably committed to crossing that border; that is, there is no physical way of changing your mind and you must enter the destination country. (You know ... equivalent to the "Last American Exit.")
I ask since it seems to me (and I am willing to be corrected) that the moment you start crossing the Ambassador Bridge, even if you have not officially entered the U.S., you might very well be under U.S. jurisdiction since (as I mentioned) you have no choice but to continue on. And if that's true, it strikes me that if some dumbass trucker crosses the point of no return in heading for the U.S. and then stops to make a political point, it is the U.S. constabulary that will deal with it, which might be why the U.S.-bound traffic was freed so quickly, but Canada-bound vehicles are still fucked because of the screeching incompetence of our law enforcement.
Thoughts? I just get the feeling that while Canadian cops dither and waffle and scratch their doughy asses, their U.S. counterparts have no patience for this kind of shit. But I'm willing to be corrected.
AH, IRONY. If U.S.-bound traffic is indeed flowing again, the irony is that Canadian truckers can now cross into the U.S., but Canadian truckers are preventing them from returning; in effect, causing precisely the same problem that "Freedom Convoy" idiots are claiming to protest.
How droll.
Posted by CC at 8:53 AM

I’ve said it elsewhere, I’ll say it here. There are 3 ways to resolve these blockades:

1. The vehicle drivers move their vehicles voluntarily and stop being a bunch of turds.

2. Bring in heavy tow, or heavy lift, and physically remove the vehicles - at owner expense.

3. If 1 and 2 don’t happen, send in the army with crews armed with cutting torches and cut the vehicles into scrap metal.

… pretty sure after the first truck gets dismantled, #1 will start to happen all on its own.

4. (At least with the Fuckers Brigade in Ottawa)

Since it's still winter, after giving a 24-hour warning to go back to East-Western North Bumblefuck, Alberta, or wherever it is they come from, any stragglers will be left to endure a series of waterbombings, to occur at regular intervals (30 minutes?). The water will come from a source of dubious quality and substance...Lake Erie! Dousings will continue until the remaining fuckers bail or surrender.

I grant that the practicality and legality of the above is rather questionable, but desperate times call for creative measures. Particularly given the fact the Ottawa "police" and "mayor" have been useless as tits on a bull, and the Ontario "premier" is up to his ass with his own head.

"...the practicality and legality of the above is rather questionable ..."

Meh - these clowns haven't exactly been too worried about whether their actions are legal, or much of anything else.