It was back in Feb of 2021 that Dominion Voting Systems, pursuant to suing the living shit out of lots of people for defamation, submitted a list of people and entities they wanted social media companies to preserve the data of. Anyone here look familiar? 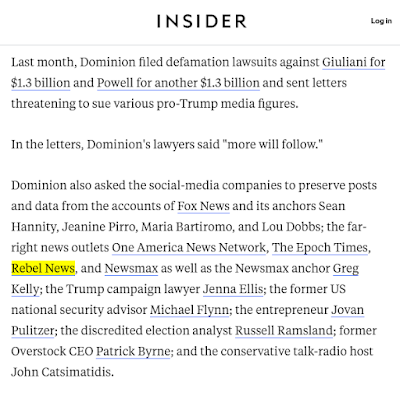 P.S. If you want to know why Dominion is so irked with Rebel News, well, I wrote about that a year ago.
Posted by CC at 9:03 AM

I'm sure there were many reasons for Ezra's unceremonious and abrupt keelhauling of Keean Bexte, including Bexte's embarrassingly lofty opinion of his own skills and value in a "just-one-ego allowed" shop, and his alarming fondness for uncritical reporting or invention of some extraordinarily lurid conspiracies.
But I suspect a significant factor was Ezra's panicked need to put as much space between Keean and the Rebel after Keen went full Q-anon on the Dominion story, "revealing" that George Soros and Dominion were sharing an office in Toronto. As you will recall, it turned out that an NGO partially funded by the Tides Foundation once had an office in the same building as a Dominion office.