Times must be good at Rebel News these days, as Ezra Levant is suddenly on a hiring spree: 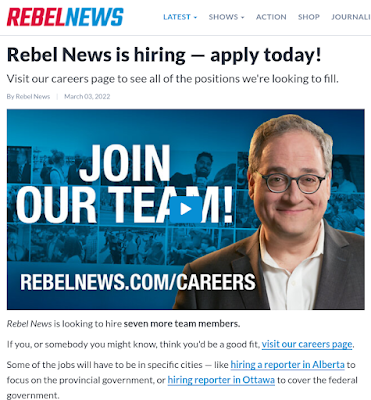 One wonders where all this dosh is coming from for all those additional salaries, oh, wait ... 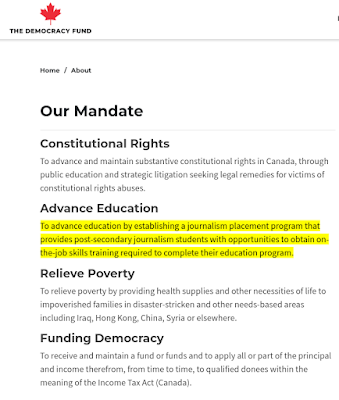 That would be Ezra's in-house registered charity, The Democracy Fund, conveniently including as part of its mandate (you guessed it) subsidizing "on-the-job skills training" for journalists. Man, talk about luck -- possibly being able to pay new hires with what you collected through a registered charity and being able to hand out tax receipts for it.
Note well, though, that TDF's mandate specifically restricts its (tax-deductible) largesse to "post-secondary journalism students," so if they're funding the typical inept, talentless yobs currently employed at Rebel who are not post-secondary journo students, that would seem to be at least a wee bit problematic.
Perhaps someone should be looking into this.
AND THIS IS WEIRD: A couple days ago, an anonymous tipster dropped me a link to a cache of docs related to TDF here. I'm still not sure what to make of some of that, but it sure looks like it deserves a second look, particularly TDF's having apparently simply taken over and re-labelled an existing charity, then re-purposing it completely while retaining CRA charitable status.
If that's legal, it would seem to represent a pretty massive loophole in CRA charity regulations, no?
Posted by CC at 7:15 AM

The TDF directors changed three times before renaming the organization Bao Bao with Love to TDC. It's easy to say that the move was calculated, because it was Sheila Gunn who was forced to make the transaction.If the money came out of Rebel News' accounts and not Ezra's personal money he had no choice. This all led to Lyle Dunkley. Ezra had recruited him and nineteen other Canadians who made sense un groupe qu'il appelle des «investisseurs éthiques conservateurs» - des bailleurs de fonds idéologiques qui voulaient un taux de rendement financier, mais qui étaient prêts à recevoir un rendement inférieur pour mettre a publié un magazine qui a fourni «un taux de rendement moral», vraisemblablement, la satisfaction qui accompagne la publication d'une lecture de droite dont ils pourraient être fiers. This all led to Lyle Dunkley.Ezra had recruited him and nineteen other sensible Canadians. A group he called "conservative ethical investors" - ideological backers who wanted a financial rate of return but were willing to receive a lower return for putting out a magazine that provided "a moral rate of return," presumably the satisfaction that comes with publishing a right-wing read that they could be proud of. With President Lyle Dunkley, a well-known oil executive and also President of Rider Resources, Standard's financial team raised just over $750,000. With Ted and Link Byfield's joint endorsement, Levant left behind its law practice, conservative partisan politics and constituency squabbles with elected party leaders, and entered a world with more ideological consistency.