As ever, here's Ezra Levant, pissing blood in outrage over ... well, something he just made up: 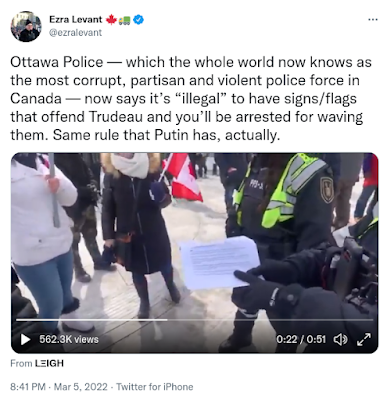 In fact, if you watch the video, the officer is explaining, quite clearly, this part from "General Rules for the Use of Parliament Hill" (last updated in 2018, clearly pre-dating the recent unpleasantness):

Why, yes, waving a massive flag that reads "Fuck Trudeau" (even if "Fuck" is spelled with a maple leaf) pretty obviously runs afoul of general rules prohibiting what you can read in the last sentence above.
So if Ezra Levant could, you know, shut the hell up and stop lying about shit, that'd be great, thanks.
P.S. Read the non-negotiable regulations for the legal use of Parliament Hill, and start making a list of how many were broken by the FluTruxKlan idjits. Seriously, make a list. The rest of us will wait right here.
Posted by CC at 10:12 AM

Just another reminder - the Ezra Levant who is currently defending the deployment of hundreds of FUCK TRUDEAU signs at Canada's leading tourism attraction for families, tourists and school groups, is the same Ezra Levant who was Shocked and Appalled that Ontario's curriculum used the word "vagina" by teachers in classrooms to describe genitalia.

"Fuck Trudeau? No no no, the flag says 'Fick Trudeau', which is German for fuc...wait, hold on a minute..."

*Walks away, then returns a few moments later*

"No no no, the flag says 'Fick Trudeau', which is Swedish for 'Got Trudeau'.

What do you mean what does that fucking mean? Isn't it obvious? We've got Trudeau. What do you mean you're confused? We've got Trudeau...as our Commie pinko Socialist Marxist bastard of a tyrant dictator! What do you mean why doesn't the flag just say that, and why in Swedish? Why so many questions? Are you one of those libt***s trying to cancel me? Stop with your cancel culturing, you fucking tranny-loving, pronoun-spewing snowflakes! Also, stop with your fucking swearing in front of my bastard children, you shitty-ass motherfucking asshole bitch! Help! Help! I'm being oppressed!"

In 2015, an Alberta man was fined $543 for a F*CK HARPER sign on his car. He wasn't even Parliament Hill that has its own regulations.

Anon @ 4:29AM: What's your point? We're talking about regulations that govern acceptable behaviour on Parliament Hill, not something that happened in Alberta in 2015. Try to keep up.