Well, you knew it was coming: 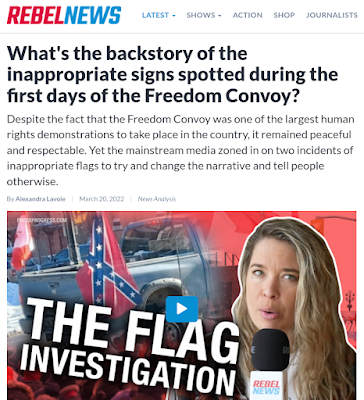 That would be utterly untalented professional victim Alexa Lavoie, ignoring three weeks of intolerable occupation and siege of the core of Ottawa, choosing instead to focus her significantly inadequate investigative skills on ... two flags. (Spoiler: They were plants by pro-Trudeau forces designed to discredit the "peaceful" and "respectable" protesters who, day after day, physically barged into downtown businesses and harassed and assaulted women who had the temerity to wear masks in their presence.)

If Lavoie were any more deceptive, disingenuous and dishonest, she'd be Sheila Gunn Reid.

What a lot of investigatin' she could have avoided just by contacting the dude who took the Nazi pic and posted it on reddit prior to it being forwarded to the media.