Ah, the snake eating its own tail. Or something like that.

If you've ever wondered how Ezra Levant's Rebel News both creates the news, then covers the very news it creates, I could not present a better example than this: 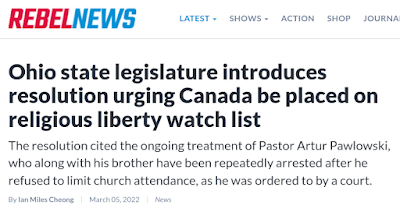 Let's follow the bouncing ball, shall we? First, "Pastor Art" Pawlowski is nothing more than a common bigot, racist, homophobe and low-level grifter, but he was picked out of a pool of such low-lifes by Ezra Levant's grift factory for the sole purposes of martyrdom and fundraising.

Every violation of pandemic lockdown laws by Pastor Art was greeted with hysterics and hyperbole, with carefully-doctored video of Pastor Art kneeling on a busy highway or airport tarmac, with the preceding video of him voluntarily putting himself in those positions having been conveniently deleted.

After months of such martyrdom (and relentless fundraising ostensibly in the name of defending religious freedom but, in reality, simply to line the pockets of opportunistic lawyers and others), Pastor Art was sent southward to hob-nob with such right-wing luminaries as Josh Hawley and Ted Cruz and Lindsey Graham, his exploits having been misrepresented to the extent that, Jesus Christ, said conservative lawmakers are seriously promoting the idea of Canada being a religiously intolerant nation simply because of the law-breaking adventures of a single unprincipled grifter and con artist.

And that's how the news works at Rebel News. But I suspect you'd already figured that out, right?