After crowdfunding $3.72 billion and openly and unambiguously promising that everyone facing charges related to the Coutts, Alberta border blockade would get free legal representation, Rebel News provides an update basically saying, "Well, OK, not so much":

Hilariously, after making it clear that there would be no freebies for people accused of actual serious crimes that demand a legitimate criminal lawyer, all we hear is that numerous people have "sought" Chad's coruscating legal expertise, without telling us how many of them will actually get it.

I'm sure those details will be forthcoming.

JUXTAPOSE! It's fascinating to see the ridiculous slant put on Der Rebel's trucker coverage. Here's Sydney, tearfully recounting the travails of Coutts resident and compassionate saint Joanne Person, who only wanted to help: 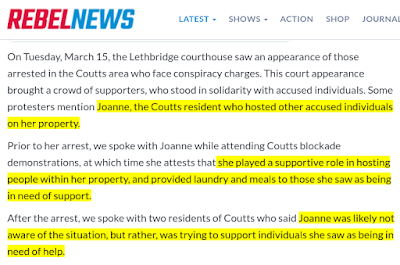 And here's the coverage from an actual journalist: 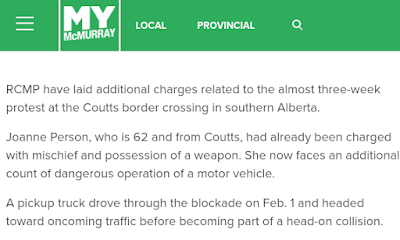 P.S. It's been entertaining to watch the evolution of the Rebel News/TDF trucker defense fund grift, as it slowly whittled down who was eligible to play.

In the beginning, there was a resounding implication that everyone everywhere in the national "Freedom Convoy" would get a free lawyer, and there was much celebrating and so on.

Then the web site went up at truckerlawyer.ca, whereupon one learned that that fundraiser was meant strictly for people involved in the Coutts, AB blockade:

which instantly disqualified all those yobs and yahoos who occupied Ottawa for three weeks. Even more, if you read the above, the offer for free rep was restricted specifically to "truckers," which suggests that if you were just a fan, or supporting the convoy, or perhaps a support vehicle, then you were out of luck.

And, finally, as you can see above, neither Rebel News nor The Democracy Fund have any interest in funding a lawyer for people accused of serious criminal charges, leaving all that money to, apparently, defend a small group of people from parking tickets and moving violations.

And that's why you read the fine print.

Sounds like Ezra crowdfunded a gazillion dollars promising legal representation and all seeking it are essentially getting a free lawyer for 30 minutes to tell them they're fucked?

@RNO: Effectively, what you said, given that the only cases Der Rebel seems willing to fund would include minor things like parking violations, public mischief, blocking a highway and so on, and it's incomprehenslbie that a judge wouldn't just say, "Guilty, fine, pay the cashier, next!"

What defense can one even *imagine* being effective here?

@RNO: In all the time that Rebel has been offering free legal representation, I've wondered how many people misunderstood that as Rebel offering to pay their fines, only to learn a very harsh and expensive lesson after they've been introduced to the fine print.