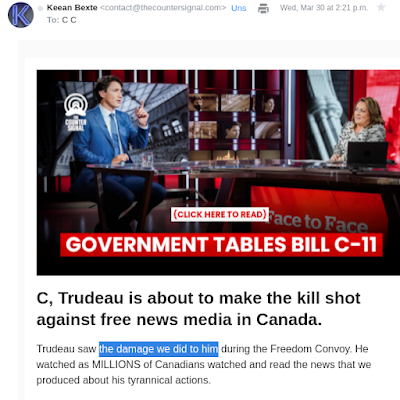 And given that this is going to happen again, I can at least suggest to those dumbass lawyers that they take a screenshot of the above, wherein Bexte openly brags about "the damage [he and others] did to [Trudeau]," making it excruciatingly clear that Bexte is not acting as a journalist, but as a hatchet man.

If federal lawyers can't make a case against White Power Boy Bexte with that blatant admission of being not a journalist but an anti-Trudeau attack dog, then they should ask for a refund from whatever strip mall law school and laundromat gave them their law degrees.

P.S. There's actually a much simpler and more compelling argument the federal lawyers could have made, but that's for another post.