A sitting U.S. Senator publicly called for the assassination of another country's leader ... 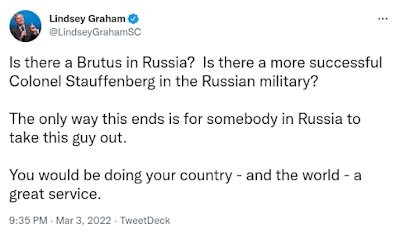 I, on the other hand, was banned from Twitter for life for describing racist and white nationalist human garbage Canadian Senator Denise Batters as a "twatwaffle."

Not going to age well for the lady bug asshole closet case Graham- but alas he will face zero consequences just like his phone calls to Georgia to help him reelect the orange fraudster (who by the way, will also face zero consequences) and will be a stain on the world until he actually, expires one day.

The Russians have sent out assassination squads to try to kill prominent Ukrainians. The world would benefit if they killed Putin and his pals instead.

What a difference a few years makes. You were banned for calling Batters a twatwaffle, now they're everywhere.
https://www.blogto.com/eat_drink/2022/06/members-only-waffle-house-toronto-majesty/