Apparently, career miscreant Randy Hillier is being represented by one David Anber: 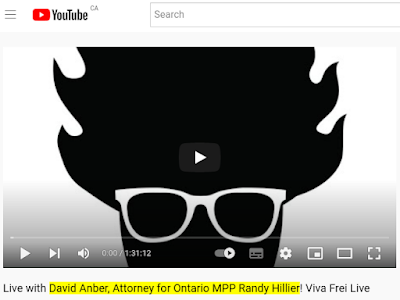 That would be the David Anber seemingly being paid by Rebel News' fundraising arm The Democracy Fund, whose CRA-provided tax charitable status means that Hillier's legal defense is perhaps being partially funded by you and your tax dollars.

Tune in tomorrow when Rebel's Ezra Levant whines about the leftist welfare state, where libtards expect everyone else to subsidize their lifestyles with your taxes.

CURIOUSER AND CURIOUSER ... While Hillier lawyer David Anber is promoted by Ezra Levant and Der Rebel as "working with The Democracy Fund," there is no mention over at TDF of Hillier on their web page listing "Cases of Interest."  So is this an independent case unrelated to TDF fundraising? Are any TDF donations being used for Hillier's defense? And are people getting tax receipts related to that?

So many questions. So little transparency.

Well, at least this guy's a criminal defence lawyer, although he was caught by Ottawa police posting client confidential information all over the internet. Not a good look for a lawyer, even if I do understand his frustration in dealing with overly redacted documents. https://ottawacitizen.com/news/local-news/ottawa-lawyer-reprimanded-after-posting-clients-private-information-online/