In the face of Ezra Levant's and Rebel News' latest legal rogering, wherein not only did Ezra lose both appeals against Al Jazeera and The Narwhal and get whacked with significant costs ... 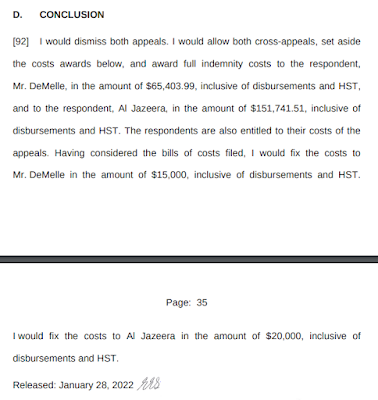 ... but a moderately unreliable birdie whispers that Ezra is already prepping for an appeal to the gowned and sequined Laurentian elites at the Supreme Court of Canada, apparently just to put off the day when he has to cut a cheque for all of the above.
"The Democracy Fund" fundraiser in 3 ... 2 ... 1 ... charitable tax receipts still an open question.
P.S. We are so not done with "The Democracy Fund" yet.
P.P.S. Two moderately amusing observations about the above ruling. First, the total of just north of $250K does not include Ezra's own legal fees, which one suspects is in the same neighbourhood, which suggests that Ezra's knee-jerk reaction to someone calling him a neo-Nazi or whatever is going to cost him and Der Rebel a cool half mil (not including whatever it costs him to file with the SCC).
Funnier, though, is that part of the appeal addressed yet another cripplingly stupid motion judge who fucked up the cost award in the first place, whereupon the appeals court corrected that so that Ezra ended up paying even more in costs than was first levied against him.
BONUS TRACK: Perhaps the most useful snippet from the ruling above is the legal finding that Rebel News is a journalistic cesspool with no redeeming qualities and no reputation to speak of.
OK, I exaggerate (slightly), but here's the snippet:

which means that every single attempt at a defamation action from either Der Rebel or its Obergruppenfuhrer Ezra Levant for the rest of time will have to contend with the legal finding that Rebel's reputation already sucks.
That's gonna sting.
Posted by CC at 4:30 AM

You'd think they'd find that last thing hard to argue with--I mean, haven't they claimed that they shouldn't have to PAY on libel suits based on the idea that their reputation sucks so bad that nobody would take what they said seriously? Or was that some other right wingnut?

“… cannot be said to be unblemished”

Well … that’s quite the slam. I wonder how long it took the judge writing that decision to come up with such a polite way of saying that Rebel News is a flaming compost heap run by a gasbag?