Rebel News' Ezra Levant unwisely admits to something he might have wanted to keep to himself: 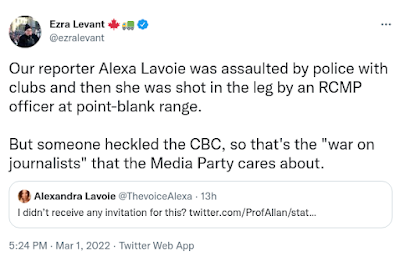 Notice the unwise admission? That would be the "point-blank range" characterization of Lavoie's savage, brutal, thuggish, crippling, life-threatening, fascist, Marxist, Leninist assault ... oh, you get the idea.

Except that given that this happened while the organized constabulary were warning everyone (demonstrators and journos alike) to back up and disperse, what the fuck was Lavoie doing within "point-blank range" of the officers? Oh, right, she was "pulling a Menzies"; that is, deliberately confronting and provoking to get a reaction. Then she got one, and is now whining about it.

Fuck around and find out, dear ... that's how it works.

Erza and fiends are not reporters or journalists.

As for the "war on journalists", too bad. So many are just cheap stenographers and propagandists that they do get the respect they deserve (not much).

What exactly was in her job description for this "assignment," because it sounds like a workplace safety issue to me.

"Hey Alexa, get in the face of riot cops in a tense situation don't comply and see and record what they do!"

No reputable news organization or business would do that. There are labour laws and people who just care about their staff. Was it dangerous-stunts-for-clicks. I hope the young woman recognizes her boss's disregard for her safety and is doing alright.