Even as things are being moved into place to drop another hammer or two on undischarged bankrupt and massive debtor Patrick Ross, one would think he'd be trying to salvage the dumpster fire that is his life by perhaps spending his time working, or looking for work, or doing something minimally billable so he could attack the inexorably growing debt of more than $105,000 he owes me.
Well, no: 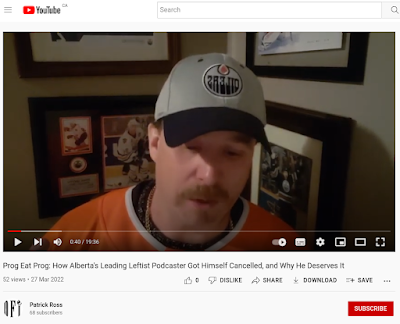 That would be Patrick, investing almost 20 valuable minutes uploading a YouTube video that almost no one will watch, and that will bring him absolutely no income of any kind, but in Patrick's universe, this is time well invested.
What's important here, though, is that if you look at the background, you see numerous bits of hockey memorabilia, suggesting that the 40-year-old Patrick is back in the Lloyd and once again living in his mom's basement, and if this is indeed the case, anyone in that vicinity is invited to keep an eye open for Patrick and where he hangs out, and what he is currently blowing his money on, and so on and so on, so that when the hammer falls yet again, Patrick will have even more 'splainin' to do about why he is spending his money the way he is, and where he got it from in the first place.
You have nothing better to do, right?
Posted by CC at 10:45 AM

But Twatsy is only 9,985 subscribers and 4,999,832 views away from monetization! He's going to make it huge one day, when one of his hot takes (and endless collection of Edmonton Oilers hats) finally goes viral!

He joke a joke the other day and added comedian to his bios. Now he's the whole QUADRUPLE threat!

Once he makes his bed, he'll add chambermaid. In his world, if he attempts it once, he's the best to ever do it.

It's sad and pathetic, but we are talking about Patrick Ross. While it pisses him off, it's my opinion and there's fuck all he can do about it.

I don't care what he says online anymore. When people inform me of his latest brain fart, I just record it and gather evidence to prove it's false. No need to reply to him. No need to care about him. No need to worry about him. He can't do shit against anyone and he knows it. It's why he's dodging OSB and the sheriffs seizing all his assets.

Fact: He's in Lloydminster living at his Dad's again. Rumor, and it's just a rumor until confirmed, is he's the new janitor at the glory hole in Lloyd. I'm sure he'll tell you all more about it.

RNO: It's safe to say that Patrick has no idea what's barreling down the tracks at him, as I have another chat with the OSB scheduled for next week, wherein we will resolve what to do with him. Spoiler alert: He's not going to enjoy it.

CC: If you look at his Twitter account, there's zero engagement. The only time people converse with him is if he's trying to troll someone or getting trolled by someone.

He's killed off his own audience. None of his 1100 followers engage with him. I've looked at the analytics for his last 60 tweets, and frankly his numbers are better on Youtube where he gets 5-6 views a month.

He's yelling into a mirror and no one's winning the arguments. It's pathetic and sad in a way. This guy can't get out of his own way, and all he does is further damage his reputation by acting out to get attention.

He's a narcissist without an audience. I stopped giving him one but it's not stopping him from libelling me almost on a daily basis. Not smart.

Patrick has the freedom of expression, but he's not free from consequence of those free expressions.

He's literally suing me for libel while libelling me almost daily. It's quite funny to be honest. He doesn't believe all this will be taken into account in court. Little does he know, he behavior during his case absolutely does. All I've said is the truth. All he's said is lies, and then rationalizing those lies. He even moves on to justify them.

Patrick thinks he can't be sued due to his circumstances. We're bouncing around the idea of testing that theory.

Any guesses as to who wins that argument?

RNO writes: "Patrick thinks he can't be sued due to his circumstances." I can assure you, he can be sued, regardless of his current circumstances. The law does not make exceptions for people who are so fucking stupid that they are unemployed, unemployable, insolvent bankrupts who think that that makes them immune from prosecution.

And if you're thinking of testing that theory, you might have to take a number.

CC: Do we know for sure she's proceeding?