Well, you knew THAT was coming.


How amusing. Only days after I expose Blogging Tory "Neo Conservative" for the lying, pustulent hack that he is, we have the child rape-obsessed Richard Evans pulling exactly the same stunt: 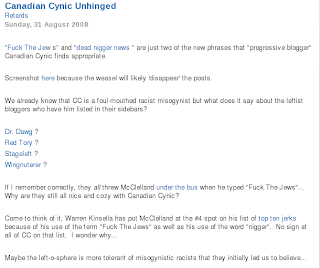 Oh, dear. Where to even begin?

First, it's not clear why Dick is so strokingly excited about that screenshot since, unlike so many of Canada's wanks, we here at CC HQ don't disappear our posts down the memory hole. I like to think of it as "accountability." But the true dumbassitude of Dick's post is, of course, his gross misrepresentation of my post title, "Fuck the Jews," which was both my interpretation of Canadian PM SteveBob LoadPants' attitude to Canadian Jews, as well as an admittedly edgy reference to the very phrase that got Robert McClelland in so much trouble, lo, those many months ago.

Naturally, none of this matters to NAMBLA Dick, whose reading comprehension probably handles about three words and not much beyond that, inspiring him to embarrass himself with a post that bears absolutely no relation to reality. (The same can be said for his other reference, which involves my poking fun at Neo for being creepily fixated on the violent deaths of Toronto's minorities.)

Ah, but now the fun starts, as Dick calls out folks like Dr. Dawg, Red Tory and others, demanding that they explain their lack of screeching condemnation of yours truly. Yes, there's Dick, a man who registers look-alike domains and redirects them to child sex and white supremacist sites, simultaneously standing there, his arms akimbo, stamping his widdle feet in disgust, demanding that others rationalize their social and cultural positions. Ah, the delicious irony.

And, oh, by the way, Dick, if you're seriously going to accuse me of racism and misogyny, what say we take a sizable poll and see which of the two of us has a better track record for defending the rights of gays, women and minorities? No, seriously, let's put it to a vote and ask Canadian women, if they had a choice, which of the two of us they'd rather have in their corner.

After all, there's me, whose co-bloggers distinguished themselves in the past Canadian F-Word awards for defending the principles of feminism. And there's you, who encourages people to visit a website that promotes sex with children. Yeah, I'm sure that's a big hit with the soccer mom crowd.

How about it, Dick? You wanna compare street cred? Go ahead -- make my day.

OH, THIS IS DELICIOUS. Yes, I realize I shouldn't continue to poke stupid people with sharp sticks, but NAMBLA Dick has an update on that original post that begins thusly:

Update: Oh Look! CC's still pissed that I accurately pegged him and his comrades as NAMBLA enablers.

So, let's follow the logic here. Calgary blogger, failed politician and child rape obsessed Dick Evans registers the domain "canadiancynic.net", redirects it to the home page for NAMBLA (North American Man-Boy Love Association), and therefore concludes that I am the child sex enabler.

Yes, he really is that deranged. I mean, that's Patsy Ross territory there. Someone should give the little woman Corinne Evans the name of a good divorce lawyer. And police protection. And not necessarily in that order.

Heh. Richard Evans and his 57 flavours of crazy. I wish he'd just pick one and stick it with.

What the idiot who called Rosa Parks a "pawn?" He can go fuck himself, the racist prick. Along with the Macadamia Nut, who's never seen a crime allegedly perpetrated by brown people that he doesn't gleefully blog about.

What I'm saddened by is that my friend Darcey Jerrom has apparently taken their crap seriously.

At least I hope he was. Do you really think that he's that stupid?

Richard Evans, wonder when he will finally sue me? - I guess he just another chicken shit looser....

As usual, Flaccid Dick is out to lunch.

Hey, C_WTF, you're right. It seems to me that Richard was going to get all lawyered up as soon as his big election was over. That was, if I recall correctly, more than a few months ago.

So how about it, Richard? How's the big litigation coming? Any subpoenas coming our way soon?

Thats interesting, because I've had emails coming from Neo-Conservative asking me how I could get all uptight over the vandalism of signs and properties and the cutting of brakelines of cars in Guelph and yet not condemn you for your nasty language you use against certain Blogging Tories. In otherwards, he was equating the 2, and he demanded to know why I wasn't publicly condemning this blog.

Needless to say, I told him he was a real piece of work trying to compare the 2 incidents, thatI wasnt your brother's keeper, and to go bug someone else with his vendetta.

Then I put him in my spam list when he persisted.

He's a real piece of work that one. I almost never visit his blog (despite CC's frequent linking to there) because aside from being a racist sewer, it's just such an incoherent, illiterate mess. Anyway, I made the mistake of commenting the other day and the dragged up some comment that I'd made over a year ago, took it out of context and threw it back in my face as if to prove something. Creepy. This guy apparently keeps all of the comments made on his blog going back years. What a psychotic loser!

Zorpheous said...
This comment has been removed by the author.
10:20 AM

Wake me when Richard has something intelligent to say.

I had one hit from his site, and went to see why I had the blip. Very lame,... I considered putting up the roach graphic, but he's not even worth recycling my old photoshops.