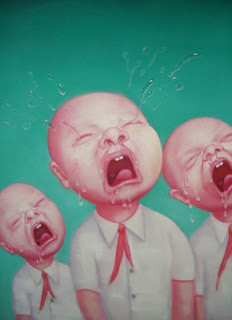 Uh oh. Here's hoping Suzie All-Caps has an adult diaper to pull over her head because there'll be no stemming the flow of tears and snot. Bill C-484, the kicking abortion's ass bill, passed away quietly over the weekend. Mourners are recognized by their large, lurid placards, incessant demands for dominion over the bodies of others and by the whiff of piddle that hangs about them. Rumours of a large number of organizations and their massive polls are greatly exaggerated.

C-484 had suffered, since being loosed by Ken Epp, from an underlying case of dishonesty. That was compounded when foet-o-fetishists exposed the wedgislation to the cruel light of scrutiny after letting their true intentions slip. Recent fears of a possible election have caused the Prime Minister to rein in his team's true agenda for the sake of ambition and electability. It seems inevitable that after the removal of the CPC feeding tube, the misshapen bill would slip away.
Posted by Lindsay Stewart at 9:14 PM

Hate to be a 'little black cloud' but I'm not quite so ready to celebrate. I'll do that when they lose the next election.

I have no reason to take Nicholson, or any one of them, at his word. They've been quite the truthful bunch to date, right?

Sure, Epp will be gone. He isn't standing for re-election. But there is a significant group of old Reform-a-torys still in caucus.

Watch and listen what these folk do and say during the campaign. You just may hear some dog whistles.

Bubbly's on hold until after the vote's counted.

C-484 was declared dead because it became a lightning rod that drew a wide range of real and actual groups - pro-choice activists, health care professionals, women's organizations, lawyers, unions - together, in opposition to the Cons.

They will try to find an even stealthier mechanism to criminalize abortion.

I respectfully disagree with you, ff and d.

Of course you're right that there's many (a majority in fact) in caucus who'd love to criminalize abortion. Balanced against that though, is the fact that Harper is the most controlling and dictatorial party leader in memory, by a wide margin.

Even a retiring MP like Epp, who has just been publicly kicked in the balls, will keep quiet, as have others like Myron Thompson when Harper's done things to step on their toes. Compare that to the open revolt and defiance against Chrétien (a leader who actually gave his party majorities)

I don't have the slightest fear about abortion rights or marriage rights. Not because I trust Harper to look after my interests or women's interests, but because I trust him to look after his own. Issues of this sort are total losers for him. Not a single vote to gain, and lots of votes to lose. So he lets his supporters think he's open to changing the status quo, gives them a motion or allows a private member's bill, and then snatches the rug out from under them.

What we have to fear from Harper is stealth. The issues that won't cause a massive outcry because not enough people care. It's the funding for Status of Women, the court challenges, the deportation of gay and lesbian refugees. But issues that affect middle-class women and gays directly? He's not going to touch them. He has nothing to gain and lots to lose. That's why we still have government funding for Pride parades attended by millions, but gay refugees are sent back to countries where they'll be jailed or killed.

I agree with your view of Stevie's strategy. He wants to win and will throw (warning! mixed metaphors up ahead) his foot soldiers under the bus if he needs to do so.

However, C-484 had become an embarassment, the point of a wedge that could destroy his well-controlled election machine. It drew opposition, relentless, opposition from a great number of quarters and it had become to draw visibility in the media along with the Order of Canada debacle. It reinforced an image of the Cons as big losers, with rabidly fanatic followers.

So he made Nicholson - when was the last time he held a press conference - scuttle C-484.

Well so much for my belief Epp would keep quiert. It now appears Epp isn't being a good little foot soldier and lying down to make the bus driver's job easier. He won't withdraw his bill.

The cynic in me (lower-case "C", not trying to be the blog-runner) wonders if this isn't what Steve-O hoped for in not even having the courtesy to tell him. I can't help thinking that every time Harper is oublicly denounced by a so-con he gets a teeny, tiny, wee, little erection. If he could somehow get Cheryl Gallant to resign bitterly, he'd get up to a full 5 cm.

I have to concur about BigPants' micro-erections. He's probably hung like a hamster.

Stevie's sexual orientation has got to be a complex mélange of perversities.

Which does not preclude a raping and pillaging mindset.

By the sound of it, if Stokwell Day became PM back in 2000, you guys would be shreiking in horror - ah the scary so-cons, save us!

pardon a little humour, but it is kinda of funny how you guys are so terrified -or hateful- of those social-conservatives! :)

Yeah, so much for Epp being the good little foot soldier...

Can't let yours eyes off them for a second. As I said earlier, watch and listen to the socon element on the campaign trail.

"pardon a little humour, but it is kinda of funny how you guys are so terrified -or hateful- of those social-conservatives! :)"

Yes, Michael ... unlike Canada's so-cons, who reacted to a simple trinket being given to Dr. Henry Morgentaler with such maturity, dignity and decorum.

Really, Mike, do you people even listen to yourselves talk? Seriously.

Seems that Mike should be thinking a little more instead of blindly swallowing KoolAid...

michaelcc said "...pardon a little humour, but it is kinda of funny how you guys are so terrified -or hateful- of those social-conservatives!"

Yes, I'm waiting for your humour.

Anytime now would be good, michaelcc.

BTW, if you need to work on that humour thing, you may want to check out how we do it at Birth Pangs.

"By the sound of it, if Stokwell Day became PM back in 2000, you guys would be shreiking in horror - ah the scary so-cons, save us!"

If Stockie had become PM back in 2000, right now we'd be in the middle of our second straight Liberal majority government.

I'll cut Michaelcc some slack because he just needs a few years to get some life experience before he understands the loathsomeness of people who'd presume to dictate how we conduct our personal lives.

"pardon a little humour, but it is kinda of funny how you guys are so terrified -or hateful- of those social-conservatives! :)"

Speaking only for myself (because everyone else clearly has more than enough capacity to speak for themselves), I'm neither afraid of nor hateful towards any socons. I just view their spewings in the same category as I do the dogshit my neighbor can't be bothered cleaning up after his pooch. It stinks, it's ubiquitous, and if you're not careful, you might end up tracking it into your own house. But a diligent scraping and then lots of soapy lather usually gets the job done.

Michael C said...
This comment has been removed by the author.
8:02 PM

For the record, I'm not a so-con and I DO support "a women's right to choose". Its always a little awkward when middle aged men discuss issues like abortion. Oh BTW chimera, I'm sure many socons can say the same thing about liberal progressives...but thats the beauty of politics. And you guys, especially you, canadian Cynic, should respect the fact that I read your blog - and I don't avoid it like the plague like my other fellow BTers! :)

"...I'm sure many socons can say the same thing about liberal progressives..."

I'm sure they can, too, and who would blame them? But wasn't it "a little humor" you were after in the first place?