While Buckets and others have been doing stellar work feeding "Dr." Chuckles McVety and his vaunted 42 anti-Morgentaler "organizations" through a woodchipper by revealing the incestuous relationships therein, I believe we can whack at least one more off the list for quite another reason. Consider, if you will, a member of that list: "4 My Canada." And who precisely is "4 My Canada," you ask? I'm so glad you asked.

Let us first do the obligatory "whois", to reveal, uh, not a whole lot:

That doesn't really tell you a lot, does it? No administrative contact, no technical contact. Not much of anything. OK, so let's pop over to the web page to find ... again, not much in the way of organizational structure. There is a contact page: 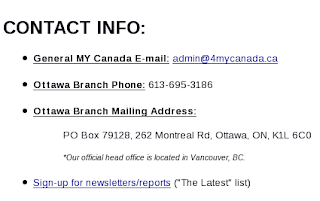 but that gives us nothing more than a e-mail address, a phone number and a post office box. So where's all the rest of the organization info? You know -- the president, the executive, the administrative staff? Anyone? Who are these people? Who's running the show? Or, put another way, where is the accountability in having an actual person standing behind that site?

Which allows us to conclude ... what, exactly? In a nutshell, nothing. Which is exactly why we can write off this "organization" as having no value whatsoever. You don't get any public relations value out of having an address, a phone number and an anonymous web page. Sorry, kids, but that just doesn't cut it. And unless we have some reason to think there's an actual group of people backing up that site, we are perfectly within our rights to assume that that group numbers exactly zero. Because we have no reason to believe differently.

Now, if I was feeling frisky, I might just do a Google search on that phone number and see what comes up. But, frankly, I'm feeling lazy. So have at it. Let me know what you find.

That phone number and mail box addy in East Ottawa certainly do ring a bell.

Too busy right now to google up but I just know someone we know has blogged on the people behind that.

It used to belong to "Jesus Cry" from Edmonton before that organization got its own phone number. That phone number was also listed as a contact for "Siege Conferences" in April.

So, in short, another right-wing religious nutjob umbrella group.

Boy, you guys are lazy... took me all of ten seconds!

(They all share that PO Box, too. Gosh. It must get crowded in there.)

OK, CC, I took a moment to dig about.

Despite the mail drop and digits in Ottawa, these folks are based in BC.

This would be them.

They're also involved in this.

As for the blogger we know? Uh, yeah. Just a couple days ago, which led to this.

Kryskow, who is described on The Cry’s website as its “visionary director”, is in her early 30s. On her personal website, Kryskow describes herself as an “itinerant minister” and speaker. She will, for example, participate in October 2008 at the All Nations Convocation in Jerusalem, organized by Watchmen for the Nations, a Christian right and pro-Israel group based in the U.S. and Canada. Kryskow also leads a conservative Christian youth group called 4 My Canada, which has purchased a six-bedroom house not far from Parliament Hill to serve as its “discipleship centre”.

I love how her bio says that her book was "accepted into the Parliamentary Library of Canada." Because, I don't know, it has an ISBN number? They've even requested copies of my three-copy-print-run radical left-wing 'zines from the late '90s. They'll take anything! Because they're a repository of Canadian publishing! Cripes.

Renee, dear, I actually knew all that. I just thought I'd give you all something to do. The thrill of the hunt, and all that.

You mean I took time out of writing my own post to...

AND I EVEN LOOKED AT FAYTENE'S ART.

The one with the soaring eagle was especially subtle.

When in doubt, knock 'em out!