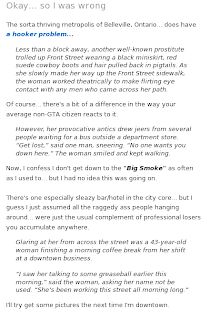 Super ... so now we'll have one of Stephen Taylor's finest, stalking the streets of Belleville with his Canon PowerShot, snapping pics of the working women and ... what? Creating a clever collage above the computer in his basement? And warning the kids that they really shouldn't disturb Daddy when he's in the downstairs office anymore, if you catch my drift?

I'm sure nothing good can come of this. God help us all if the RCMP start reporting on murdered hookers in Belleville -- I'm betting you'll be able to hear the moans of satisfaction from Neo's basement all the way to Kingston.

Stephen Taylor's Blogging Tories of Canada: Because if you can't blog about national politics, dead niggers and hookers will do just fine, too.

"Don't forget to take photographs of the johns trying to pick up the hookers too, because it's also a crime to sollicit someone and offer to pay them for sex.

Women walking to work or shopping don't deserve to be harassed by men cruising around, looking for hookers ... someone like you, for instance."

But then I thought better of it. Why take the risk that this nutcase could track me down?

I really don’t understand why you pay the slightest bit of attention to him. Based on what he writes and the subject matter he fixates on, he’s nothing but an illiterate racist and a twisted freak. While that might situate him squarely in the demographic of Stephen Taylor’s stable of luminaries, he still has absolutely nothing of any worth to say about anything.

Oh, come on, RT ... how can I pass up the chance to slag the BTs by association?

Granted, it's unlikely anyone's ever going to Google on the combination of "Blogging Tories" and "stalking hookers" but, hey, you can always hope.

I think stalking itself is pretty characteristic of "conservatives," though. It's started with Rachel Marsden and it's like they've all copied it.