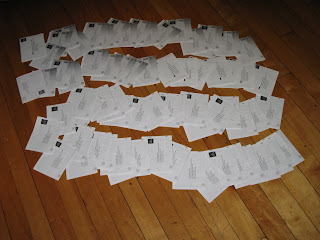 What could be more delightful than to pick up the mail only to discover a fresh batch of conservative party propaganda? Well lemme tell you, the most delightful thing about this new batch of franking abuse is to note that it comes from my bestest pal Bev (Our Lady of the Limousine) Oda. This bit of Conservative mail spam, abuse of privilege and taxpayer funded campaigning is a bunch of tough talking gobble about youth crime.

Here's what slippery Bev, from over in Durham, wants to share with the residents of Kitchener.

The former Liberal government implemented a toothless Youth Criminal Justice Act which sent a terrible message to young people who were at risk of falling into the trap of violence and crime. Lenient laws meant these young punks only got a slap on the wrist for their crimes. It is little wonder that so many young hoodlums learned to easily dodge our justice system.

It's time thugs and hoodlums learned that Canada is a peaceful, secure country that will not tolerate lawlessness. Thanks to real leadership from Prime Minister Stephen Harper and the Conservative Government, lawbreaking punks will have to take real responsibility for their actions, just like every other hardworking Canadian.

Hoo-fucking-ray Bev. So all those hard working In and Out crooks can look forward to meeting the full impact of our judicial system. That's good news. And a Prime Minister and government that turns a blind eye to the illegal imprisonment, torture and abuse of a Canadian citizen, captured as a child soldier will get marched off to the Hague to face charges I am sure. Certainly we can expect Ministers of the Crown to face the full consequence of abuses of privilege for personal gain and gratification. Call up the limo service Bev and hand in your frequent flyer card, you hypocrite. You want to throw the book at some kid that swipes a couple of hundred dollars worth of stuff after you've perched your spoiled ass in a limo to the tune of thousands of our dollars. Classy.

Perhaps a good way for youth crime to be stemmed would be for the people at the very top of our social ladder to set a little better example. Perhaps if our national police didn't kill people in airports with electrical weapons and try to cover up their deeds. Perhaps if our politicians didn't scam the system for power and profit. Perhaps if you and your ilk were just a little more honest, a little less greedy and selfish, then perhaps Bev, our young people might feel a bit less inclined toward crime. Perhaps if we rededicated ourselves to providing the very best of education and opportunity. Perhaps if we had built them a culture and a society that engendered hope rather than avarice, we might see some of that investment returned. Perhaps if our government wasn't eager to label them all as pirates to assuage the greed of foreign corporate cartels. Perhaps.

But no Bev Oda, you've happily crawled up to the trough and made a pig of yourself, racking up the limousine bills and making sure that you were well looked after. You were one of the folks that were more than happy to front for your corporate masters from abroad, trying to foist a broken, malicious copyright reform on Canadians. That little bit of crap and your bald faced profiteering/fundraising from the same folk you were supposed to be regulating got you shuffled. Bad optics Bev. Can't have bad optics. These same youths that you and your party of retrograde fools are happily demonizing as thugs and hoodlums are the same kids that fat Steve's boss, l'il George, promised not to leave behind.

But Bev honey, you and Harper and the Cons are happy to leave people behind aren't you. You're happy to leave Canadians rotting in foreign jails, you're happy to brush aside our own laws, ignore our treaty obligations and abdicate our morals if it suits your agenda and purpose. You're content to let Canadians rot, right up to the point where it starts to look bad in the press.
Then suddenly you'll ship a helpless idiot like Helena off to sip some beers and take some snap shots. Then you'll squeal and wince for the cameras and try to blame all of your errors and woes on the Liberals. And why is that Bev? Rhetorical, let me tell you why Bev, because you and your gang want to be immune to the very responsibility that you preach. You sneer at the notion of being held accountable for your actions and you will obstruct and manipulate and fib until the moon falls from the sky to get out from under. But in the mean time you want to build new jails and fill 'em up as fast as you can. Look how well it works down south, folks are making good money off the prison-industrial complex and that means it must be good, ain't that right Bev.

Anyway, I took the liberty of rescuing a little stack of your unwelcome propaganda, your wasteful, taxpayer funded partisan campaign literature and I'll be shipping it back to you Bev. Here's hoping you don't get a paper cut while you read through them. I'd hate for you to get a boo-boo and need to call a limo for an emergency, all day ride around the town to find a Band-aid.
Posted by Lindsay Stewart at 8:18 PM

I still think that kicks to the scrotum of all Conservative politicians would be more effective as the Harper government as a whole are mentally retarded and their supporters incapable of cognitive reasoning.

The more it goes, I think rehabilitation camps are the only solution...

I live in a CPC riding, so my parrot cage liner was addressed from my MP himself.

Luckily, I was able to fold it and send it back -- not before adding a little commentary, of course, about exactly how terrified I was of roving teenaged hoodlum gangs.

Cry panic and let piss the pants of fear, as they say.

Can someone say "perpetual campaign mode"?

One more from the Karl Rove playbook.

Its a preview of the talking points the Cons are going to try in the next election. Wunderkind Con Pierre Poiliervre sent the identical one to my house too.

Over at my place, I think I did a fairly good job of debunking the "roving gangs of teen thugs" meme.

Stupid Conservatives will believe anything.

They're trading on the fresh violence in TO. Timing is all. Never mind the stats that say violence and crime are down across the country and have been for years. Stats are nothing against the emotional furore of immediate murder in the headlines.

Punks. Hoodlums. Violence *and* crime. But they're very clever young things as well apparently, because these 'utes' learned to game the Liberal system. Well, hell, why aren't they being trained as lawyers? Are the powers that be afraid they'll become Liberal Lawyers?

That's very emotional language and yet strangely toothless and worn, in the vein of 'get off my lawn'. Who is this missive appealing to? Just how many times are these and similar terms used in the appeal being sent out (as noted in your article) to different ridings?

Perhaps if all high schoolers in Canada were tasered once a year on becoming a 'junior' as part of the sociology curriculum, the Conservatives would be satisfied preventative justice was done.