Would someone please beat the shit out of Stephen Harper?


Oh, wait, my bad, I misread that ... it is, of course, a sitting Conservative MP publicly encouraging the violent physical assault of Michael Ignatieff.

That's awesomely timely, of course, since it was just earlier this week that Blogging Tory Paul E. Marek stood there, his arms akimbo, tapping his foot in annoyance, demanding that someone produce evidence of right wing-inspired advocacy of violence. Man, that has to be supremely awkward, eh, Paul? Paul?

And in a related and MASSIVELY predictable development, Canada's Blogging Tories take time off from whining about the incivility of the Left to frantically look away: 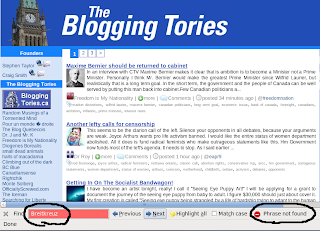 P.S. Is it just me, or has anyone else noticed the really creepy, threatening undertones to Canada's Blogging Tories recently?

I've always thought this "unhinged anger of the left" shtick was among their more hypocritical and tired clee-shayze.

From the Winnipeg Free Press article:

...Breitkreuz said he would never use words like cult to describe police chiefs or call on Liberals to beat their leader.
"This language is not me. I have kept this (gun registry) debate civil for 15 years and I want to keep it civil."

A fine example of a cowardly fool who denies his own drivel.

Is Breitkreuz actually denying that he wrote those words? Based on his extremely careful choice of language, I don't see an actual explicit denial there. Do you?

I agree that in speaking with the Free Press the MP was careful in his choice of language. "This language is not me" can be read any number of ways.

Joan Bryden reports that "Breitkreuz said he would never use words like cult to describe police chiefs".

True, he doesn't use "cult" to describe police chiefs, he merely says they head something - exactly what is not mentioned - that is "like a cult". Why? Because "their endorsement can be bought". More careful language. No, no, no, he's not saying that they can be bribed.

A side note: as of 9:30 EST, the news release for which he has issued an apology (addressed to no one) is still on his site.

Breitkreuz is dissing part of the press release coming from his own office?

The man is a tool.