The brown trousers of Jonathan Kay.


We were having such an animated Zerb-related discussion in the comments section, and then ... 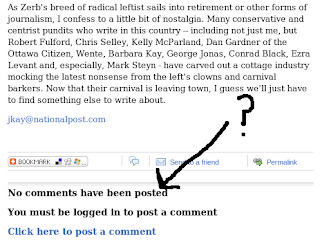 Tune in next week when the National Post frantically protects the delicate, wallflower sensibilities of another of its useless, asshole journalists. 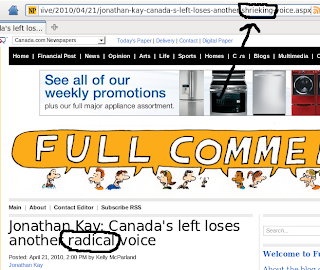 That your published URL doesn't match the current post title is generally an indication of an actual adult coming over, checking your submitted work and fuming, "Oh, for Christ's sake, Jonathan, what are you, five? Grow the fuck up, already! Jesus, the things I do to keep that screech harpy of a mother of yours happy."

At least, that's how I imagine it going down.

(Wag of the tail to Mandos.)

Well well well...so much for their "free speech."

I distinctly remember a commenter recommending Zerbisias stick to writing about her large breasts and someone accusing Haroon Siddiqui of suffering from small man/small penis syndrome. And since Jonathan Kay participated in the discussion, he was most certainly aware of it.

It's a scandal that quality discourse like that is no longer available for posterity.

You're welcome. Note that Kay went on a righteous undercover mission to mock the Tea Party people on behalf of David Frum. Including James O'Keefe.

And for all that, clue not found, abort/retry/ignore?

That's what happens when pampered children like Kay and Frum are confronted with real populism, as opposed to the false one they've been championing cynically over the last decade. They're more mystified by it than the rest of us are.

Heh. The NP editors routinely do that "change the title to make it a little less hysterical-sounding than the original" thing. I first noticed it with one of Barbara Kay's columns awhile ago.

Hysteria must be a genetic trait (hopefully recessive).

At the National Pest, speech is not free, but is paid for by Right Wing Welfare. It looks from WK's blog that that is soon to end:
http://warrenkinsella.com/2010/04/national-post-r-i-p/
Hey, what's with Kinsella's continued use of the NP Inage of hisself on his blog and on his FB page? Is that just to annoy the Posters?

I think Frum and Kay are genuinely frightened of the Tea Baggers.