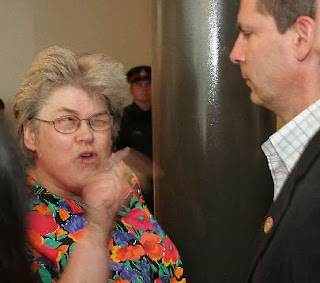 In a fit of grotesque cowardice, the spineless Dalton McGuinty has taken the supine posture, presented his wet, pink belly and given in to the ignorant and the superstitious. It appears that Charles McVety, that bulbous mongrel, has tendrils running into Queens Park as well as directly into the orifices of the Conservatives in Ottawa. Faced with open defiance from the Holy Roman Diddlers and the typical clouds of methane from McVety, the evangelically brain damaged and Muslim groups, our premier has decided to cede the day to the representatives of the 12th century. Typical of the modern politician, McGuinty has placed his own short term interests ahead of the health, welfare and education of the province's children.

The Ontario government is shelving a controversial new sex education curriculum that it had planned to roll out next fall.
Premier Dalton McGuinty moved swiftly on Thursday to nip in the bud a mounting problem for his government, one that was pitting it against Christians, Muslims.
“It’s become pretty obvious to us we should give this a serious rethink,” Mr. McGuinty said.

Actually Dalton you squealing whelp, it is rather more obvious that you've tucked tail and prefer to whine in a puddle of your own making rather than face down a scheming little prat. You allowed a person whose operations deserve a thorough forensic auditing and the various charges that might result to tap you on the nose with a rolled newspaper. It has become pretty obvious that this province deserves leadership that it will not receive from the Ontario Liberals or the Progressive Conservatives. It is the voting public that should be rethinking your job security McGuinty you tremulous wimp.

The changes were part of a regular review of Ontario’s physical education and health curriculum, which hasn’t been updated since 1998. They went nearly unnoticed until a Christian group, led by evangelist Charles McVety, threatened to pull its children from school.

Charles the fat fuck censor McVety. Captain of a shell game of nested schemes run out of his dubious Canadian Christian College seems to have a rather larger slice of influence in government than a snake oil salesman ought to. No surprise that this self aggrandizing creep would have his snout pressed into the crotches of every pol in reach. Like any good cur, you have to sniff a lot of crotch to find the musk and McVety is nothing if not a dedicated mutt. With all due respect to McVety, and that is precious little respect indeed, these pious fools are placing the lives and health of children in peril to assuage their own ignorance and fear. They are so far removed from reality that they have no business pretending to act as educators and guardians. The Catholics in particular need to clean their own house before daring to raise their ugly snouts to preach morality.
In all sincerity, if these cretins and their followers want their own children to wallow in ignorance then by all means pull them from the school system and good luck to those poor kids. Let's have an end to public funds flowing into the coffers of corrupt organizations like the Catholic church. Failing that, how about we elect some politicians that remember we are a secular nation and that the standards that the duly elected government establishes are not subject to the approval of any religious group. Period. Let's have the Catholics and McVety investigated and stripped of tax free status. Let's have the political machinations of these dirtbags exposed to the light of day. Let's not fall victim to the shari'ah of any group or faith, Christian, Muslim, Evangelical or whatever.
Tip of the hat to stageleft, on Twitter, once again.
Posted by Lindsay Stewart at 5:30 PM

He may be spineless, but it may also simply be an issue of getting it through to him that flip-flopping will not only cost him the right, but also his own supporters.

Even if he is a cowardly jerk, it doesn't seem right to sacrifice what would have been good legislation on the altar of his cowardice.

He only decided to rethink this. Considering that nobody had even heard about it until the last couple of days, that is reasonable, despite the fact that the repressed ninny McVety was involved. The cause celebre in the making for the socons has been defused. They can either crow about how they call the shots in government, or whine that the government isn't far right enough. What they can't do (at least without looking foolish) is claim the government is a bunch of lefty social engineers who don't listen to the people. They cried wolf, the government listened. It is hardly a capitulation of send something back for more study and consultation.

The sane folks will now speak rationally about this, and it is likely many of the changes will go ahead.

The real question to me is: Are teachers therefore gagged from answering sex questions from students? If a student has just read, perhaps on a site of a McVety fellow traveler, that all gays are pedophiles, and asks the teacher about it, is the teacher gagged from telling the truth?
Perhaps "Dr." McVety can be asked if he expects that teachers cannot correct coded hate mongering.

"He only decided to rethink this"

And he left a trail of fearful piss in his wake. You can play damage control on this if you like but he knuckled under to the mental defectives and religious loons.

You can play damage control on this if you like.
You do know that I have no connection to any political party, other than voting for them, right?

he knuckled under to the mental defectives and religious loons.
Your opinion, but it is still early days. I think it is refreshing that a government will actually rethink something when there is significant dissent. Unlike the feds, who are ideologues who think they know what is best for all of us. It is a great reminder to me of why the Harper regime is so odious. Letting the loons have their way temporarily on a minor issue is the best way to draw them out, let them get even more radical in their blathering so their lunacy marginalizes them.

I do agree with investigating McVety and his questionable businesses. But that will come soon enough.

Interesting, I'm guessing not a peep from the usual suspects: imagine the hue and cry if it hadn't been muslims AND christians?

Woo! "RELIGIOUS NUTS TELLING OUR GOVERNMENT WHAT IT CAN AND CAN'T DO!!"

This kind of surrender also sends a message to christofascists like McVety that his kind still have pull. Kowtowing to these religious zealots only empowers them. Dalton, I'm not impressed...

I would have to agree with liberal supporter on this one. It is bad enough that Red Toryism is now officially dead thanks to, quite ironically, John Tory, but it is even worse that the Ontario PC are being filled with regionalist populist, and religious nutbars who, with their 'salt of the Earth' sanctimony crap on Toronto or city life as some sort of 'lefty socialistic' dystopia.

From my own experience, these same people have managed to rally much of rural base against McGuinty to the point where edge ridings (town/rural) are being swung to the PC. So, I don't fault him for picking his battles. At the very least, it dilutes the talking point that Liberals are 'elitist' and ignore the will of other constituents. If McGuinty did stand firm, he would have risked eroding the voter support outside of urban centers much less Catholics, egged on my McVety, who still comprise a large enough constituency to influence the electoral outcome. Was it spineless? absolutely, but was it pragmatic? I would say so as he ultimately, keeps occupying that frustrating 'mushy middle.'

As for your question liberal supporter, I believe it is heavily regulated such that the teacher would not technically be gagged, but issue a response that is 'within the Catholic code.' It is amazing that amount of censure on that topic when evolution is actually making inroads in the Catholic curriculum.

And yes, I do also believe McVety should be scrutinized to the fullest extent. This cabal of false populists is getting worrisome. There was one time where Randy "Suspender Revolution" Hillier had momentum in the PC party to the point where he had a shot at the leadership.

Where did you get that picture of Hunter? And how the hell did she get so close to the Premier of Ontario?

He only decided to rethink this. Considering that nobody had even heard about it until the last couple of days, that is reasonable,
No wonder Liberals are almost as mocked as Conservatives.

If nobody had heard of it, then don't even fucking bother introducing it. You'd think that some fucking adults would have the balls to stand up to the McVety's and say "fuck you and go fuck some inflatable ruminant"....

That's actually a photo of a lady named Diana Inkster, Kingston & the Islands anti-poverty activist and shit-disturber extraordinare, berating McGuinty last year on a visit to our riding - I believe this was for his removal of the nutrition supplement from Ontario Works "income assistance" last year. She made the local paper for that one. (Tho she'd be happy about the use of the photo in this context, I'm pretty sure, too :)

I get the feeling that the blogging tories that are happy about this move are really happy about being ignorant...

Sara Landriault is offended by "naming body parts in Grade 1 " - because little wee-wee is a much better term... What a vagina.

I have a feeling that the cognitive dissonanceometer will be registering a very high reading from the social conservatives, especially given that they ally with those whom they spit on every other day of the week.

Kids with holy roller parents are always the most promiscuous, too. Those nutters are living in LaLaLand.

McVety went after Wynne's personal life, which has no room in politics whatsoever. McVety couldn't handle and went after what he calls the 'special interests groups', when he himself is a member of one.

But hey, here's an idea, why don't parents themselves be in charge of their chillens sexual education. Why leave it to the state in the first place? Hte stoopid. In 1992 I got a call from the principal. Apparently my 6 year old told her peer 'that no, your mummy's tummy is NOT getting any bigger, it is her uterus that is expanding with her new baby'. So F**ing what?
Get a grip people, and do the parenting job. Don't leave it to the state, they always f**k it up.
McGuinty is a spineless wad, you think anybody else could do better?
Not bloodly likely.

I think you're treating Dalton unfairly. Maybe the other guy's invisible friend is bigger than Dalton's.

The "state"? Wtf? Who do you think the "state" is? Aliens from Planet X? The government is just other parents at work, dude. Get a grip.

And the nutters complaining about their kids being taught something about sex, science, whatever, are parents, too.

Cripes, leave your bunker once in a while. The rest of us live in a whole society.