And here's where we juxtapose ...


Amusingly, the same people who think this is howlingly funny and can't stop giggling over someone else's years of cruel imprisonment ... are the same ones for whom life is sometimes just terribly, terribly traumatic: 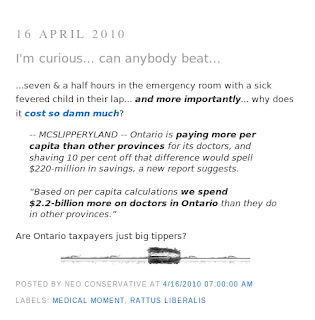 That would, of course, be Blogging Tory "Neo Conservative", taking a break from celebrating the regular beatings, stabbings and violent deaths of other peoples' children to whine piteously when his little sociopath gets a case of the sniffles.

Unknown said...
This comment has been removed by a blog administrator.
2:15 PM

Grasping for straws, isn't that a summary of your belief system Wayne?

In other words, fuck off.

In case you missed it, Wayne, fuck off.

khadr was a child soldier protected by the geneva conventions which canada, when we had some honour, helped to author. khadr was shot through and buried in rubble at the time the mysterious grenade was thrown. evidence implicating khadr was tampered with, testimony changed and/or fabricated out of whole cloth. subsequent testimony and statements are worthless and should, in a decent society, be inadmissable as the fruit of torture and prolonged abuse. the simple fact that khadr is in custody, after all this time with no due process, flies in the face of jurisprudence and is flatly illegal under canadian and international law. evidently large swaths of the united states are effectively lawless. khadr, whom you convict is only now coming to "trial" in the cobbled together, unconstitutional commission hearing. thus, if there is anything approaching decency in these americas wayne, he should be afforded no less than the presumption of innocence until proven guilty. and they'll have a damned hard time proving anything when their testimony is perjured from the outset.

oh. and fuck off you moron. you even acknowledge that he was a child soldier. his human rights, his charter rights and legal rights have been pissed on by a parade of corrupt politicians and military murderers. the authors of his incarceration are no better than terrorists, they just have nicer clothing.

Unknown said...
This comment has been removed by a blog administrator.
3:23 PM

I repeat, fuck off, Wayne.