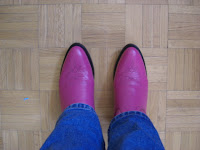 Versus my taste in boots. 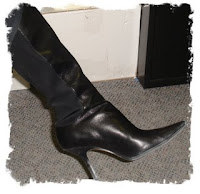 I report, you decide.

P.S. While there are many, many words that I could use to describe my reaction to that atrocity masquerading as a pair of boots, jealous is not one of them. Obviously Wendy's taste in men/heroes and footwear are on the same, shall we say, highly questionable scale.

P.P.S. I'm tired. I just thought that needed to be said.

If those boots have rubber soles, that is just 31 flavours of wrong, not counting the pink.

I hasten to add I was referring to Wendy's bubble-gum coloured boots. Yours are to be revered. : )

I'll go with the comment balbulican left over there. ;-)

Wendy's, on the other hand, look like something a six year old would wear. *gag*

The trousers are pulled down over the pink booties to hide the Princess of Bacon (tm) logo.

I miss my boots.

Frankly, I've been appalled by fashion since the early 90's, so I really can't comment on these things anymore.

Somewhere outside the frame of that first pic, there is a Hello, Kitty price tag lying forlornly on the floor.

I love you, LuLu. You're after my own heart with your footwear choices.

Wendy should not be allowed out of the house in those monstrosities.

purple galoshes sexy? not so much. black leather stilettos? fuckin' a, bubba.

I dunno CC I don't think Wendy would wear Hello Kitty stuff because it's made by the godless Japanese.

and, just when I think her and that Shaidle character will eventually tone it down and fade into obscurity where they belong, they do things like post pictures of themselves that either leave me cringeing or laughing all day long.

oops. i see you've made the (barely evident) distiction.

KEvron said...
This comment has been removed by the author.
3:02 PM

Just more proof that the free market fails without intervention, as in "Someone should kill that designer."

btw: "gift", my ass. ten-to-one, that goldbrick's been dipping. what do we know about her? she's impulsive, irresponsible, immodest, shallow, her taste is in her ass and she's an exibitionist. enter a sudden modest windfall. add it all up and i get rosalie goes shopping.

Well is gay pride weekend. Maybe someone is trying to tell us something...

i finally figured it out! it looks like she has a couple of dog's cocks at the ends of her legs.

Lulu knows where my heart lies...