The douchebaggery of Kathy Shaidle. 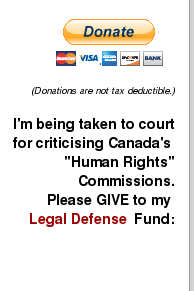 Um ... no, Kathy. You are not being taken to court for criticising the CHRC; you are being sued for libel. There's a difference, although I'll understand if none of you shrieking, hysterical whackjobs understands what it is.

Jesus, what a douche. Did I mention that Kathy's a douche? Yeah, she's a douche.

Yes, but she's a douche that gets moustache rides. And that counts for something.

Hmmm...soliciting funds dishonestly? Isn't that like, illegal, or something?

what ti-guy said. there's got to be some law against seeking donations under false pretenses. then again, anyone who would donate deserves to get hoodwinked.

Lying...its all the socon right has.

Gawd that woman is slime.

And Sheena, thanks for making me throw up in my mouth...

Even with a good stretch, this remains a falsehood. She's not being sued by a Human Rights Commission, but by a member of the public whom she publicly called a criminal.

Ti-Guy has a hell of a good point. I don't know why I never read this banner closely during my frequent visits to the poisoned well.

It’s an indictable offence under S. 380 of the Criminal Code and if found guilty she should could be liable to a prison term not exceeding two years. More likely however, given the probably small amount involved, it’s just punishable on summary conviction that would land her a modest fine of several hundred dollars. She would however have a criminal record, so no more trips to Vegas, baby!

Sheena, that is, how you say? -- unpossible.

That's the site the paranoid delusional whizzbangersandmash used to cite all the time at a forum I used to infest a few years ago.

I was getting e-mail death threats from him for a year. It was rather flattering. No one's cared enough about my opinion to kill me before. :D

"No one's cared enough about my opinion to kill me before."

they don't ignore you until they ignore you. i feel your pain.