Oh, this is going to be good.


Oh, dear. If I were the unfortunate Mr. Friesen, I'd be dialing a good lawyer right about now.

Canada's conservatives: Always willing to lecture us on the civility of discourse, when they're not physically stalking our family members.

CURIOUSLY, the very people who have been howling and shrieking and stroking themselves into a high dudgeon over my anonymity all these months and years couldn't be happier about getting their information via anonymous e-mail or from a website by an unidentified blogger.

AND THE FRANTIC BACKPEDALING BEGINS: On Dick's post currently:

Update: For those who seem to be confused: Linking to another website and asking if the information is true is different than stating something as fact. As the initial e-mail notifying me of the site came anonymously, for all we know, It was a red herring sent by CC himself... With that in mind I've pulled the guy's pic but left the original post intact...

Luckily, CC HQ stalwart LuLu had the foresight to do that screen cap thing: 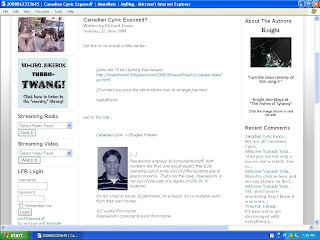 An image that Mr. Friesen's lawyers are more than welcome to. No, no, don't thank us ... we're all about protecting the children. Especially Dick's.

Of course it would.

Oh my ... I wonder if NAMBLA-Dick has any idea of the shitstorm he's in for now that he's posted this poor guy's picture and personal info on his web site.

My email is in my blogger profile. I know the name of a complete prick pitbull of a lawyer should you feel the need to sue NAMBLA-Dick's creepily-obsessive, yet oh-so mistaken ass off.

What a terrible waste to have so much "sleuthing" come to an inaccurate and actionable end. Going through years of blog postings, not just yours but others as well, and being thrown off by a red herring. Terrible.

I wouldn't advise anyone to post at NAMBLA-obsessed Richard Evans's blog. He'll out yer grandmother and accuse her of any number of depravities.

Just being on the same interweb with Evans makes me queasy. No way am I going near his blog.

Dickie really needs to do a little more work on that Clouseau thing he's got going on. At least Clouseau was funnee.

(and too late for Ti-Guy's advice, I already commented. But, at least the e-mail addy I provided indicates and identifies only... well, yeah, 'Frank Frink').

Damn, I think he's got you CC. I mean, how many computer consultants can there be in Waterloo? Six? Seven? Next he'll investigate whether Mr. Freisen has ever been to the Huether. Dot connected.

The blog he linked to was started 4 days ago. Could it be Dick's Blog and like Denyse links to himself? No...

At the risk of being a pedant, I have to point out that by reproducing the screengrab of Dick's website where he posted personal info about this Friesen fellow, you're inadvertently committing the same violation of his privacy.

Dick Evans, once a Dick, always a Dick.

Yet I have to wonder how that police report went that Dickie filed all those months ago? Gee, do you wonder if the police in area maybe role their eyes when they see him walking through the doors of their station?

Probably filed with all the ones Werner claims to have lodged over the years.

So what're the self defense gun laws like up there? If this douchebag shows up at Friesen's door and tries some shit is Friesen free to blow his ass away?

"At the risk of being a pedant"

image and personal info are freely available at peaceworks' website.

Maybe I'm missing something then. CC appears to be upset at the posting of this information on Dick's site, but there's no problem re-posting it here. Meanwhile, Dick contends there's no problem with him posting it because he's just referring to another site with the same info on it. If all that's so, then what's the problem? Seems like much ado about nothing to me in any case. Stupid little games.

Yes, RT, you are missing something. Given that Dick has already posted this content, the damage has already been done, but here's the diff.

Given that Dick is speculating on whether or not that information is correct, what he's written is potentially damaging to an innocent party.

Given that I'm claiming that that information is utter hogwash, I'm trying to minimize that potential damage.

Yes, I see your point, RT, but if you have a better idea as to how to deal with this, I'm all ears.

Context is everything, RT. The anonymous realcdncynic blogger (funny that Richard doesn't mind that it's an anonymous blogger--this time!) is posting it in order to try to harm this (innocent) person. Richard is reposting the information in order to do the same -- though, as usual, he hides behind the aw-shucks "gee, what's all this about?" silliness. Christ but he's a coward.

However, CC is posting the information within its proper context -- i.e. to refute the claim. He makes clear that he is not Doug Friesen. Not the same.

Yes, it is much ado nothing. That's what we tend to get from Richard's site. Never have so many words been written giving so little actual thought to so few readers. Or something like that.

"nothing" nuthin! this is wreckless behavior on dick's part. he's played coy before (they ALL do, for crying out loud; i've enjoyed enough veiled death threats to consider myself an expert in the matter), so why shouldn't we take this latest blunder as any but the veiled threat it is, with the added dimension of collateral damage, thank you, dick.

argue all you want, rt, that the screenshot is essentially doing the same thing as dick's original, but i think of it as documentation. 'cause you never know....

bingo. so much for the coy act.