My good bud, Dr. Dawg, likes to tell the story of one Etorre Ovazza to drive home the danger of pandering to power. I'm just going to steal shamelessly from Wikipedia: 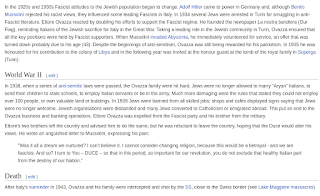 In short, Etorre Ovazza, a Jew, nonetheless pandered pathetically to the virulently anti-Semitic party in power for no reason other than out of naked self-interest. In the end, the fascists (predictably) saw no further value in Ovazza, and executed him and his family.
Sound familiar, Conservative Party of Canada?
This would be the current CPC, whose execrable members such as Erin O'Toole, Pierre Poilievre and Candice Bergen are currently pandering to the utterly lawless "Freedom Convoy" since, in their minds, this is going to be good for their political careers. Again, predictably, it didn't work out that way for O'Toole, who thought sucking up to racist, Nazi truckers was a terrific idea, and it ended with his ass being handed to him politically.
Expect more of the same as the CPC panders to fascists, and those fascists eventually see no further need for them. Those who don't know the savage lesson of Etorre Ovazza are condemned to make the same stupid mistake.
Posted by CC at 6:47 AM

Dino beat me to it, but yes, one could switch in a few names and tell the same story.

On Saturday there was one of these things in Vancouver, and I happened to be in the area, so I checked it out. One thing I noticed was that it was, of course, mostly white, but there were a few (swaggering, young, male, partier-type) Indo-Canadians in the crowd. And I'm thinking, OK, I know you morons want to have big parties in bars and not bother masking because you're party animals and hate any kind of restriction. But really, you're stupid enough to hang with these white supremacists? If they got their way you'd be up against the wall pretty quick.