"United People of Canada" fundraiser: The things I do for you people.

As many people noted, the truly bizarre GiveSendGo Freedom Convoy-themed fundraiser of the "United People of Canada" was stuck on a single donation of $13 since its inception, which made me wonder -- could one even donate? Even if these people were total crackpots, there are always similar crackpots out there who are ready to open their change purses for that sort of stupidity, which inspired me to take a bullet for you people and test.
Sure enough, after making the minimum donation of $5 (plus an extra dollar donation taken as a "tip" by GSG), well, it seems to have worked: 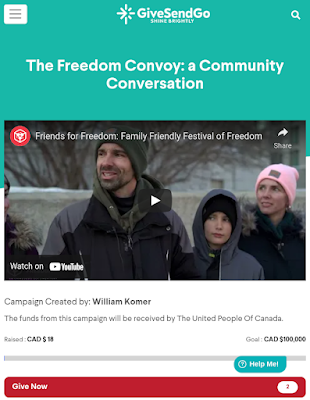 So this proves that 1) yes, you can donate, and 2) absolutely no one is interested.
Fascinating.
You're welcome.
P.S. The charge on my Visa card was exactly six dollars, so there's appears to be nothing to the speculation that that initial 13 dollars was 10 dollars U.S. It's clear my donation was processed normally in Canadian funds. Make of that what you will.
Posted by CC at 4:47 AM

Or the GSG campaigns have been created for specific reasons and will remain relatively idle until there is a need for some clean cash.

TUPOC says they get donations in recognition of their "good work". What good work? Have they actually done anything? I don't think so.

This grift could get very etertaining.

According to their site, their "Community Conversation on Reconciliation" started 2.5 days ago. There is, of course, NOTHING going on: all they're actually promising in this "Conversation" ads is to provide space if someone ELSE want to actually organize something.
BUT the fundraiser for this "event", which is obviously not happening, is still open.
That's getting close to Rebel level grift.